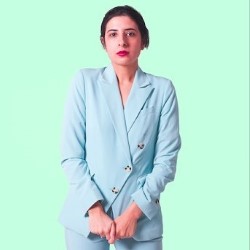 “I met Freya doing improv and from day one I thought she was one of the funniest, most glorious legends I’d ever seen on stage.”

WHAT: “Do you have an opinion? Because we’d love to hear it! Shivani Thussu’s debut hour is set in a focus group that goes too far. As seen on Pls Like (BBC). One of Funny Women’s Ones to Watch (2018). Directed by award-winning comedian Freya Slipper.”

I’ve been a lot since I was 18 to see shows, and have performed as an improviser in Jacuzii at the Pleasance for the last few years and done a few solo spots there but this is my first full hellish hour.

The biggest thing is that I got an agent and was able to quit my job as a piano teacher and start writing comedy for TV full time. I’m not good at piano but I miss my students because they never told their parents when I showed them youtube tutorials if I couldn’t play their pieces.

My show is set in a focus group where the audience are the focus group and I play the different characters facilitating it. I wrote it and I’m performing it and the genius comedian Freya Slipper directed it. It’s being produced by Brid Kirby at Fight in the Dog which is so cool cos I’ve always loved their shows. I met Freya doing improv and from day one I thought she was one of the funniest, most glorious legends I’d ever seen on stage. Feel extremely lucky to work with her. Doing previews in London now and will hopefully get to do it on the London eye one day.

Go and see my friends Flora Anderson and Theo McCabe and any of the Fight in the Dog or Berk’s Nest shows. I think Catherine Cohen’s show will be amazing, I saw it in London last year and it drove me insane.