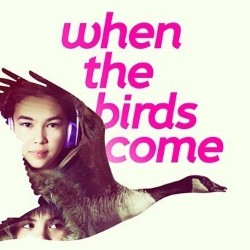 “I’ve passed the one year mark of scriptwriting FULL TIME – which is both a dream, and terrifying.”

WHAT: “Margaret has always told her little brother Stanley it’s his fault the ice is melting. She doesn’t want to live in the Alaskan tundra. She wants to run away and be a normal teenager in Anchorage. Years later, the rift between the siblings has seismically grown. In a fast-melting world, will love be left behind? Hit writer Tallulah Brown returns to the Fringe following the blazing success of Songlines (2018): ‘Magic’ **** (Times). ‘Charming… unflinchingly accurate’ **** (Scotsman). ‘Sensitive and soulful’ **** (Stage).”

Last year my play Songlines was at Pleasance Beneath for the month. I also live scored it with my band, so I actually sat on stage (with my trembling guitar), staring out at the audience, hoping they liked it, for every single performance – 45 in total…

I’ve passed the one year mark of scriptwriting FULL TIME – which is both a dream, and terrifying.

I wrote ‘When the Birds Come’ originally as a radio play about five years ago. I’d heard about Newtok in Alaska which will be the first entire town to be relocated due to climate change. I grew up right by the sea in Suffolk, erosion and the Shoreline Management plans that the UK has put in place have always been an obsession for me. Newtok has been asking for governmental help to move away from the oncoming river since the 90s, this Summer 2019 marks the start of that move. The strangest of timings meant that this Summer was also when producer Debbie Hicks was looking for a two-hander to take to the Fringe. It felt like it was now or never. I re-edited the script I contacted the Yup’ik playwright Richard Perry, who was hugely helpful with my research. I worked closely with director Alexander Lassy and composer and sound designer Roly Witherow to create what I hope will be the most magical, almost fairytale, quite childlike but DARK telling of this climate-shifting story.

My play follows siblings Margaret and Stanley growing up on the Alaskan tundra. Older sister Margaret tells her little brother that it’s his fault the ice is melting, he is to blame for climate change. The second half of the play jumps forward 10 years. From 2015 to 2025 irreversible damage will have been done to the planet and I suppose the play asks what damage between siblings is irreversible? Casting we needed actors who could jump from acting aged 8 and 13, to 18 and 23, as well as having watertight American accents – so that was quite a search, but the two we found are brilliant.

Orlando by Lucy Roslyn, DugOut’s Ed Macarthur ‘Humoresque’ and ‘Goodbear: Dougal’, Lily Ashley’s ‘The Slinks’, the HighTide programme at Assembly looks like a banger (esp ‘Pops’!) AND all hail Fight in the Dog for yet another Edinburgh to do list – they do all the work for you! ‘Ticker’ at Underbelly I’m particularly excited for and Nicola Wren’s show ‘Superstar’ will be fab, as will be ‘Wake in Progress’.

DENIM’s Crystal and Glamrou both have shows this year (the only show I saw 4 times last year was DENIMS!) James Rowland has four shows there this year PRAISE BE I’ve watched his previous shows across multiple Fringes and they’ve always been fringe highlights for me. To have all of them there at the same time, is blowing my fringe mind. Everything everyone says about ‘It’s true, it’s true, it’s true’ is absolutely true true true. Rob Oldham and Rose Matafeo got me through a particularly bleak patch of last years Fringe, food for the soul, and they’re back – thank goodness and bring on the bleak patches for this years fringe! Ooo also if you’ve got little ones then The Herd’s ‘Slime’ is the one for you!