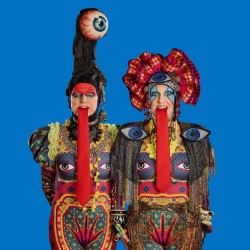 “Stylistically we use clown/bouffon to elevate the surreal, grotesque and macabre nature of the material. We also use magic, rude limericks and nudity to get our points across and for cheap laughs.”

WHO: Abigail Dooley and Emma Edwards: Co-writers and performers

WHAT: “Following their award-winning show Enter The Dragons, A&E Comedy return with a surreal and darkly hilarious brouhaha directed by Cal McCrystal. These coven-ready weird sisters will be brewing a cautionary tale for our time as they ask who really holds the power in a world where the witches are hunting and predators have become the prey. Winner of Best Show at Brighton Fringe 2017. Guardian top pick at Edinburgh Fringe 2018 for Enter the Dragons. ***** (FunnyWomen.com). ***** (BroadwayBaby.com). ***** (Skinny). ‘Totally unapologetic, brilliantly outrageous’ ***** (ThreeWeeks). ‘Gleefully improper fun’ (Guardian).”

No, we were here last year with our show Enter the Dragons. We had a brilliant time with fabulous audiences, sell-out shows and 5 star reviews. Prior to that we were both here in our youth in the 18th Century – Abigail with Compagnie Philippe Gaulier’s show The End of the Tunnel and Emma in an avant-garde production of Marat/Sade above a bus station (where she also slept).

It’s been a bit of a whirl-wind year. We were picked up by The Galton Agency who came to see us and lots of exciting things are in the pipeline. We toured Enter the Dragons throughout autumn and then this year have been heads down brewing up Witch Hunt.

We set up A&E Comedy out of frustration of not seeing enough mature female-led companies out there, especially in comedy. Our first show, Enter The Dragons adopted a classical mythological quest (including many, many wigs and false teeth) to examine ageing. In Witch Hunt we take the fairy tale as our structure to explore the current notion of witches and predators (with even more wigs and teeth). Stylistically we use clown/bouffon to elevate the surreal, grotesque and macabre nature of the material. We also use magic, rude limericks and nudity to get our points across and for cheap laughs. We both devised and wrote Witch Hunt with the marvellous Cal McCrystal as director and the incredible Bryony Kimmings as Dramaturg.

We premiered Witch Hunt at Brighton Fringe in May to sell-out audiences, 5 star reviews and a Bobby nomination. After Edinburgh we are off on an Autumn tour of Enter the Dragons and a Spring 2020 tour of Witch Hunt.

There are sooo many great shows at Edinburgh this year. Here are a few of our recommendations. For a bite of the best circus-variety show then get down to the Atomic Saloon Show – described as Blazing Saddles meets America’s Got Talent! I’m a Phoenix, Bitch is a one woman roller-coaster of a ride. Bryony packs a punch at heartbreak, motherhood and more. Garry Starr Conquers Troy – Garry is a comedy genius (nuff said). David William Bryan, the king of one-man shows has two (yes two!) shows this year, Fragility of Man and Loyal Company.

Need more gal power and a haircut? Head down to Pamela’s Palace – three comedy queens with wit as sharp as their scissors. Medea Electronica is a unique gig-theatre experience like no other we have seen before, spell-bounding and extraordinary. HoneyBee Eleanor Dillon-Reams is a brilliant poet, watch her wield her powerful words in her play about identity and self-worth.