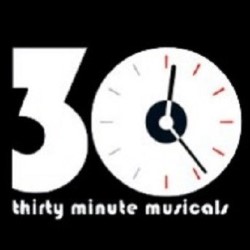 “TBrooke Seguin is our genius director/writer. She has been in the comedy scene in LA for quite some time, and came to me over 8 years ago with the idea that is now 30 MINUTE MUSICALS.”

WHAT: “Your favourite movies – musicalised! And you choose! Top Gun, Die Hard or Jurassic Park from the critically acclaimed Los Angeles comedy company, 30 Minute Musicals. With over 16 musical parodies of cult classic films under their belt, 30MM brings three favourites to Fringe. Each night the audience will vote on which “movie” they want to see – done in 30 minutes, featuring original music and all the laughs you can stand!”

WHERE: Assembly George Square Studios – The Flick at Underground (Venue 17)

This is not my first time! Last year was my first. I directed TILDA SWINTON ANSWERS AN AD ON CRAIGSLIST (returning to Assembly at the Piccolo Tent…YAY!), and it was truly the most magical experience. I just HAD to return. So I called my Los Angeles work wife, Brooke Seguin, who writes and directs 30 Minute Musicals, and said WE ARE GOING. PACK YOUR BAG NOW. And here we are! WE ARE SO PUMPED!

A series of short films I co-created got into Slamdance, and premiered there this past January. It was a whirlwind of crazy, but so very exciting. I didn’t realize how much of a big deal it was until I heard how many films submitted to be in that festival – thousands! It was really an honor to have been included.

Brooke Seguin is our genius director/writer. She has been in the comedy scene in LA for quite some time, and came to me over 8 years ago with the idea that is now 30 MINUTE MUSICALS. Basically, we take cult classic films, add in some original songs, wigs, crazy costumes, magical dancing, amazing performers, et VOILA! A show is born. We have skewered over 16 films at this point, and thought it was time to take it on the road! But we wanted the experience to be even more exciting at Ed Fringe. So, we are having the audience vote on which show they want to see each night – TOP GUN, DIE HARD or JURASSIC PARK – keeping the audience, and our company, on their toes each evening!

Well, TILDA SWINTON ANSWERS AN AD ON CRAIGSLIST for one. SHAMELESS PLUG!! Then you should see SLEEPING GIANT by Steve Yockey – some of our actors are participating in that show as well. And you must see TOM LENK IS TRASH, cause he is truly incredible. You should see both shows that Kirsten Vangsness is bringing to the fringe. She is a delight!