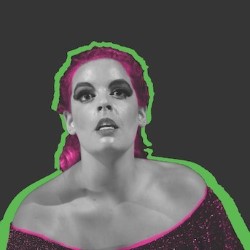 “We wanted to take a real story, and put it to the general public and ask ‘how can we find justice’, ‘how can we change’ what is happening around us?”

WHAT: “Part stand-up, part gig, with a sparkling performance by Inês Sampaio, The Trial is an interactive new play that questions gender constructions in the 21st century. Can we reject authority, and live and love in a different way? This interactive hyper theatrical performance is loosely inspired on Tieta do Agreste, a novel by Jorge Amado. Donning musical instruments, a microphone and a loop pedal, Inês Sampaio invites the audience to join her on a journey of questioning, growth and discovery. Be unprejudiced witnesses and play jury to her story.”

This is my first time in the Fringe as writer/director since 2003 when we brought Agua Viva, a show about love & grief from a Queer Perspective. I have been to the Fringe since but as partners with other artists and theatre companies: producing Luna Park in 2016, and directing the Japanese piece Busu & The Damask Drum last year.

After I directed Busu & The Damask Drum in Edinburgh we went off touring it. I also went on to produce a festival of a staged reading of contemporary Japanese plays in partnership with Yellow Earth in London for StoneCrabs. We (StoneCrabs) also kicked off a heritage funded oral history project: 100 years of LGBTQ+ Oral Histories on the Isle of Wight, which attempts to charter the LGBTQ+ history on the island for the last 100 years and will culminate in a Festival of performances, audiovisual exhibition and a book publication in September 2020.

The Trial is pretty much Inês’ and my efforts, since we worked on Tieta, we decided to take on the elements that the audiences enjoyed in Tieta (the live music, the songs, the interaction, the decision making) and put it together to create a more post-dramatic show that brought awareness to the wave of homophobic and transphobic violence we are being assailed within Brazil, and indeed as we have recently learned the last couple weeks in the UK, America and many other countries hate speech is become scarily normalised. So we wanted to take a real story, and put it to the general public and ask ‘how can we find justice’, ‘how can we change’ what is happening around us?

The play is loosely adapted from the Jorge Amado novel Tieta do Agreste, and it was written by myself, Franko Figueiredo with support of Inês Sampaio and Almiro Andrade, it is being produced by StoneCrabs and it premiered last May in Brighton. We are currently touring it: Nottingham, London, Bedford, Isle of Wight before reaching Edinburgh.

For a very different take on LGBT issues have a look at The Happiness Project from Creative Electric. And just for some rather gender-fluid fun, there’s Rouge – circus for adults.