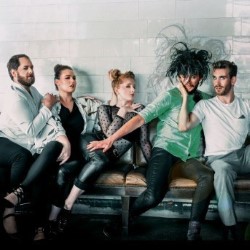 “Our show is like a dress-up party in that we tell wild and outrageous stories together.”

WHAT: “Meet the most delightfully evil man alive, Mr Hyde. A man so evil he punches the cleaner, drop-kicks a precious puffin, and yells ‘shark’ at the beach. From the creators of 2018’s hit Don Juan, this bonkers rendition of Robert Louis Stevenson’s classic novel Jekyll and Hyde is retold by a team of charmingly “French” performers with the help of the audience. Experience theatre at its most joyous with audacious performers, twisted pop songs and brilliant physical comedy. Praise for Don Juan: ***** (FringeGuru.com). **** (List). **** (Scotsman).”

We came last year for the first time with our show Don Juan, and we loved Edinburgh and the people so much we are back for round two. We pounded the pavements flyering and meeting people that way. We definitely bought our flyering A game – we flirted shamelessly with everyone we met.

I helped make and then performed in a new musical based on a long-running soap in NZ called “Shortland Street: The Musical”. It was a loving homage to the 90’s version of Shortland Street I played 90’s Rachel McKenna – she was a teenager then.

Our show is like a dress-up party in that we tell wild and outrageous stories together. But it’s for adults, so we can be a little flirty and you can have a drink or two as well. We tell you the very terrifying story of Doctor Jekyll and Mr Hyde. Mr Hyde is a terrible man and we have a lot of fun exploring all the terrible things he does (and some of the terrible things we wish we could all do)….
It’s a devised work produced by our theatre company A Slightly Isolated Dog and directed by Leo Gene Peters. The show was first made by the company in 2016 and we have toured around NZ a lot over the last 3 years. Robert Louis Stevenson was inspired by Edinburgh so Hyde-like naughtiness will probably be lurking behind every corner, which is rather thrilling. Next year we are hopefully touring it through Australia, and we’ve just started work on the third show in our party-play trilogy.

I would highly recommend the solo comedy show Aunty. She’s a fellow traveller from New Zealand, also on at Assembly and she’ll treat you very well – like one of the family in fact.