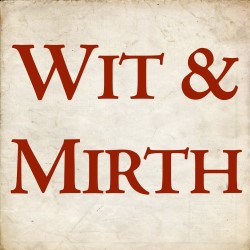 “I was put on its trail by an audience member who I got chatting to in Edinburgh last year, and when I found a copy of the book and started reading it I was enthralled.”

WHAT: “In 1698 Thomas d’Urfey published the smash-hit book of comic songs, Wit and Mirth. David William Hughes sings some of them, some of his own, and some of yours which he’ll make up for you. ‘A hoot, a bawdy entertainment, and a display of consummate musicianship which brings tears to the eyes both of laughter and sadness’ **** (ScotsGay.co.uk). ‘Hilarious’ **** (FringeGuru.com). ‘A witty gem’ **** (MusicalTalk). ‘Accomplished musicality and bawdy ribaldry’ **** (The730Review.co.uk). **** (Advertiser, Adelaide).”

I first came to the Fringe in 2011 as part of the improv group the Oxford Imps. It was an amazing experience! Despite 2011 being an exceptionally rainy year, I had the time of my life – one moment that stands out from that year is seeing Adam Riches’ show and just being bowled over by the weirdness, the level of engagement with the audience, and laughing until I cried. Since then I’ve been back many times with many different shows – 2019 will be my 6th Fringe. There’s no-where else like it for seeing the most amazing, innovative, and strange comedy, theatre and cabaret.

After last year’s Fringe I was invited to perform my 2018 show “Elizabethan” at the Adelaide Fringe. This was a fantastic experience, and involved me spending as much time (4 days) sat in aeroplanes as I spent actually in Adelaide. The atmosphere there was incredible – as was the food and wine – and it was a huge privilege to fly all the way around the world to perform.

My new show “Wit and Mirth” is a comic cabaret based on a songbook called “Wit and Mirth”, which was first published in 1698. It was one of the biggest-selling publications of its day, but is now almost completely forgotten. I was put on its trail by an audience member who I got chatting to in Edinburgh last year, and when I found a copy of the book and started reading it I was enthralled. There’s all sorts of strange songs in there – one of my favourites is about a boy who chokes to death during a custard eating competition – which I’ve taken, re-arranged, and been inspired by. I’ve already performed the show in Boston and London and hope to take it to more cities in the US after Edinburgh.

One group I’ve seen a few times, and will be sure to catch again, is the Owle Schreame. They do these amazingly bawdy versions of 17th century plays called “Drolls” which are fascinating and hilarious. There’s also some really innovative cross-overs between comedy and theatre – Daniel Nils Roberts is one act that I’d heartily recommend. And the stand up Sophie Duker is doing her debut solo show this year – having seen her at the Fringe over the past few years I definitely want to see her full hour. Other than those, just go to something totally strange that you wouldn’t get to see anywhere else!