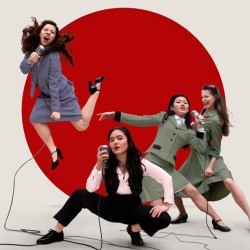 WHAT: “Turn back the dial to 1949. Iva d’Aquino stands accused of treason in one of the most controversial trials in American history. Faced with accusations of peddling Axis propaganda, Iva becomes known as the notorious Tokyo Rose – but was she the villain she was made out to be? Five female wartime disc jockeys spit piercing verse in a rap-packed musical broadcast going live in 5, 4, 3… From the team behind The Half Moon Shania: ‘Best Musical Award 2018’ ***** (MusicalTheatreReview.com). **** (Stage). **** (BroadwayBaby.com). New Diorama Theatre and Underbelly Untapped Award 2019.”

This is our second time and we can’t wait to be back! Last year we took our debut show, The Half Moon Shania, which won Best Musical! It was such a huge learning curve and a really brilliant way to cement what we are about as a company. We can’t wait to come back this year!

The biggest thing that has happened to us is that we won the Untapped Award in association with New Diorama Theatre and Underbelly. Without this award we definitely couldn’t have made Tokyo Rose, and we feel so lucky to have gained so much support from these two great organisations.

Tokyo Rose is an electrifying new musical about one of America’s most controversial trails. Accused of peddling axis propaganda, Iva Toguri became known as the notorious Tokyo Rose – but was she the villain she was made out to be?

We are so excited to be previewing the show at Derby Theatre as part of Departure Lounge Festival on the 18th of July. We have some plans for after Edinburgh, so watch this space!

Go see the other Untapped Award shows! Poltergeist’s Art Heist and Barrel Organ’s Conspiracy promise to be amazing. Some of our other favourite companies are also up at Fringe this year, including Trip Hazards with their show Progress and Bric a Brac Theatre with Mustard Doesn’t Go With Girls.