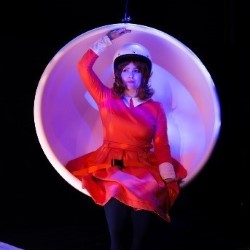 “I think lots of audiences love it because it’s a break from the busyness of the Fringe and there’s so much to do to keep the kids busy.”

WHAT: “Valentina’s Galaxy: an intergalactic adventure for starry-eyed 2-6 year olds and their adults. Inspired by women in space, this immersive performance captivates children and adults alike with a combustible concoction of experiments, rocket launches and stargazing. From the creators of Paperbelle and Too Many Penguins? Valentina’s Galaxy is a fascinating, funny and moving experience created especially for young audiences. ‘Capturing our imaginations’ (Scotsman). ‘Full of eye-popping surprises’ **** (EdinburghGuide.com). Originally commissioned by Edinburgh Science Festival, in association with Imaginate through support from the Scottish Governments Edinburgh Festivals Expo Fund. Madeinscotlandshowcase.com”

It’s not our first time in Edinburgh – we were a part of the Made in Scotland programme with one of our other early years shows Paperbelle back in 2012. We were at the Royal Botanic Gardens with Assembly and had such a great time we’re repeating it with Valentina’s Galaxy! We’re delighted to be back at the Botanics as it’s such an amazing and accessible place for families. I think lots of audiences love it because it’s a break from the busyness of the Fringe and there’s so much to do to keep the kids busy.

We’ve had a great year! We toured our show NESTS by Xana Marwick throughout Scotland, Paperbelle has been to China three (!!!) times since then and we presented Valentina’s Galaxy at the Edinburgh International Children’s Festival in May this year – always an amazing honour (whoops, sorry that’s three things)

Valentina’s Galaxy was commissioned by the Edinburgh Science Festival in 2018. It was created by myself and visual artist/Frozen Charlotte associate Katy Wilson. Frozen Charlotte is a leading company producing work in Scotland all year round and I’m delighted to be the company’s Artistic Director. Valentina’s Galaxy was inspired by research that children as young as two are already gender stereotyping. We felt that space exploration was one of the areas were generally the first image that pops into mind when you hear the word Astronaut is of a white man.

We finished a run of shows at the Edinburgh International Children’s Festival this May – after one of these shows a little girl in the audience said ‘I want to be an Astronaut’ – job done!

We’re working with Mhari Robinson of Independent Arts Producers on the show and delighted to be presenting as part of the Made in Scotland Showcase.

We’re hoping to tour throughout Scotland, the UK and internationally. It’s an exciting time for the space industry at the moment and we hope to inspire as many young people as possible to explore and find out more about the wonders of space.

There’s some really great work out there for young audiences I’d recommend. Little Top by Starcatchers – a circus inspired show for 0-18 months and Islander by Helen Milne Productions, a new musical for everyone aged 8+ (both are part of the Made in Scotland showcase)