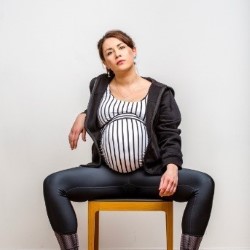 “When I first started writing this show pregnancy was on my mind, friends were having children and I really wanted to have a baby myself.”

WHAT: “A solo show – six different women, one thing in common. Inspired by society’s expectations and the pressures on women to be maternal, kind, considerate individuals. There is one thing these women share, they are all pregnant, however they rarely refer to this – but do we as an audience judge them differently because of their impending motherhood? This series of talking heads style monologues will make you laugh and cringe as we share a glimpse into these women’s daily lives, warts and all. ‘Perhaps inspired by Alan Bennett’s monologues, Pointing’s writing is funny and true’ **** (Scotsman).”

This will be my 9th fringe but my second performing a show that I have written.

I first came to the fringe in 2007 with theatre company ‘The River People’ performing in ‘The Ordinaries in an Awkward Silence’ and ‘Lily through the Dark’ with these shows we were lucky enough to win a total theatre award for best-emerging company and also the Edinburgh International Festival award.

I have also performed in other companies productions as well as attended as a director for a play ‘The Head of the Fork’ and comedy duo ‘That Pair’.

Every year is different but every time it feels like coming home… to a mad very busy home but I love it and can’t wait to be back again this year.

In September 2018 I gave birth to my daughter Rae, she’s been a huge part of this show’s journey as I performed a work in progress version of it throughout the pregnancy. This will be her first fringe experience and I’m so looking forward to taking her to some baby shows, baby disco’s and letting her explore the meadows etc.

I wrote this ‘With Child’, it is my second solo show that gives an audience a glimpse into the everyday lives of six women.

When I first started writing this show pregnancy was on my mind, friends were having children and I really wanted to have a baby myself. Then it got me thinking about my career, what would happen if I was lucky enough to become pregnant myself. It struck me that we never really see pregnant actresses on screen or stage unless the scene is focused on this fact and I thought, what about a show where everyone is pregnant but they’re not talking about it, does it still work or does it change how the audience feels about them as people?

In my team I have Flick Morris working on PR, she is also a new mum so it felt like the ideal match for this show and a meeting of minds.

My technician Simeon Miller is an absolute hero, I’ve been working with him for a few years now, he makes lights do their best thing and he’s also an all-round technical superstar.

Claire Harvey has done a stage/prop design for me, she has a great eye for visuals and used to co-run ‘The River People’ so we’ve been working together a long time. Other than this I have had guest direction from a variety of brilliant people alongside other help along the way.

I performed a work in progress of this show last year whilst pregnant at Vault, Brighton and Plymouth Fringe festivals. I then took it to Camden Peoples and Soho Theatre.

My Husband is bringing a show that he has written called ‘Who is Daniel King’ it’s on at Assembly, 18.55. He’s great and it will be great.

Some very talented and lovely friends are in shows, here are the details:

‘Gabby Best – 10,432 Sheep’ I’ve never actually seen one of Gabby shows but so many people tell me to go and I will be, sounds right up my street.

Jessica Clark is performing in a show at Summerhall, I’m not sure of the name but I am sure we’ll all have heard of it within the first week, she is brilliant.

Oh and Aphra Campbell in ‘Woke’