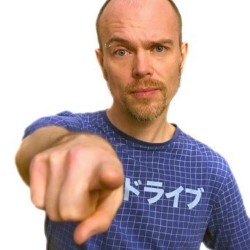 “The most important thing to me is that people walk away from my shows feeling good after having had a great time.”

WHO: Dominic Berry: Writer and performer

WHAT: “Are you aware of the devastation that is possible by just one negative thought…? Do you know what will help you more: the wise words of Buddha or the fetish uniform of superhero He-Man…? Winner of Best Spoken Word Artist at Saboteur Awards 2017 and Poet in Residence at Glastonbury Festival, Dominic Berry promises to help you fail (slightly) less! ‘I love the seriousness and the humour’ (Benjamin Zephaniah). ‘An exceptional force’ (John McGrath, Artistic Director at National Theatre Wales).”

It’s not my first time in Edinburgh……but it is my first time doing a run of two shows at the Fringe (I’m doing a PBH Free Fringe family show too – ‘When Trolls Try To Eat Your Goldfish’). I’m going to be knackered after all that but it will be so worth it!

I’ve actually done Edinburgh Fringe five times before in total and loved every one of them. One of my family-orientated shows, ‘Aaaaaaaaaaaaagh! Dinosaurs!’, was voted by Fest as one of the Top 8 shows for families at the Fringe in 2016. It was the only solo show to make their list. Not blowing my own trumpet but, I’ll admit, I was very proud of that one!

The most important thing to me is that people walk away from my shows feeling good after having had a great time. I’m just really excited about this year because I’ve got my new adult show to perform and it’s some of my best work!

Definitely Glastonbury in June 2019! This year was my third consecutive booking. It’s indescribable, even for a poet, being a part of the Glastonbury atmosphere. So many poets…….in the sun……and mud……..and magic!

A close second would be that I was lucky enough to have my poetry booked for a tour of New York State back in March 2019. I’m from a family who never went on holidays overseas when I was a kid. Money was always a challenge for us and it’s only in recent years, with my work, that I’ve had the great joy to visit places like NYC. I didn’t think people like me got to make art. Not as a job! Not to tour around the world and for it to reach so many people! So I’m glad that I didn’t quit on my dreams when times were rough.

There are loads more challenges to artists from working class families, but I believe passionately in telling children to never give up on their aspirations. Easier said than done, I know……..especially now. So I’m really proud to be staging my own family show this year with PBH free fringe, (‘When Trolls Try To Eat Your Goldfish’), in the hope that families like my family are going to be more able to see the kind of art I would have loved to have seen when I was a lad. Art which I hope will inspire and fire them up!

We are all lucky to have PBHs free fringe. It brings a lot of ace art to people who wouldn’t have the chance to see it otherwise.

‘I Can Make You Fail Slightly Less’ is my new adult show combining the following ingredients: comedy, poetry and the wisdom of the greatest self-help gurus! I wrote the show and I also perform it. But – it’s also an audience participation show so the audience actually help me perform it too! I love getting the audience involved and I will be making each show slightly different so no two shows are the same.

It’s directed by Kevin Dyer, who is just brilliant. He’s won a number of awards before, for his other work, so it was an honour to work with him on this show.

My company is me! So I suppose I came together within my own mother’s womb. In all seriousness, I had a massive interest in the performing arts from an early age, so the idea of me performing my own work to audiences was formed a long time ago. I’m just in awe of the fact that I’ve been able to do it! And very grateful.

The show has had a number of previews but it is premiering at Edinburgh Fringe 2019. Let’s see what happens following it’s run at Edinburgh. I’m very excited about performing it!

Every year the spoken word section at Edinburgh Fringe grows. Right now is a fantastic time to experience performed poetry. Our scene in the UK is bursting with talent and so much of it is at the fringe this year.

As a kick-off point, I’d recommend ‘Loud Poets’, which showcases tonnes of the best ‘poetry for the masses’!

I always cringe when poets are asked who inspires them and they don’t say a poet but a singer……yet I’m gonna do the same. I recommend a man called Stewart D’Arrietta, who will be performing the works of my favourite lyricist – Leonard Cohen. I saw this show a couple of years ago, before we lost the legend of a man, so seeing it now will be all the more poignant. All the feels! Which, when all’s said and done, is what we all want from the fringe, right? All the feels!