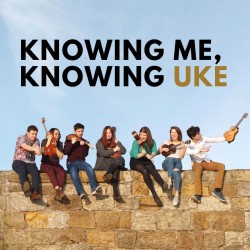 “We’re all really excited to be back in Edinburgh; we had so much fun last time and this year promises to be a great follow-up!”

WHAT: “After their sell-out 2018 debut Fringe show Too Many Ukes Spoil The Broth, Ukelear Fusion are back! Their new show Knowing Me, Knowing Uke is full of brand-new covers of songs from every genre, all played using the humble ukulele. Rock, pop, country, musical theatre, and maybe even an ABBA song or two – this quirky little band can play it all. Join a group of fun-loving students from the University of St Andrews for a show full of beautiful harmonies, great uke tunes and lots of laughs. This show is fun for all the family!”

It’s not! With Ukelear Fusion, we made our Fringe debut last year with our show “Too Many Ukes Spoil the Broth”. It was in one of those classic small 40-person theatres that you see a lot of at the Fringe. It may not seem like much, but we were so amazed last year when we realised the room was at capacity most days! So this year, with our new show “Knowing Me, Knowing Uke”, we’ve slightly upped the size but the essence of the show remains the same. We’re all really excited to be back in Edinburgh; we had so much fun last time and this year promises to be a great follow-up!

We’re a student band, so since last year’s Fringe, we’ve spent most of our time studying in St Andrews. Each year, we tend to put on two big concerts, as well as a few smaller gigs (as you can imagine, anyone organising a Hawaiian-themed evening has the town’s only ukulele band on speed dial). That’s not to say big things haven’t happened though! We’ve rehearsed a lot, and we’ve taken on more and more ambitious and technical song covers which we’ve been proud to present in our concerts. We will be performing some of the more successful ones in “Knowing Me, Knowing Uke”!

“Knowing Me, Knowing Uke” is a fun and laid-back 50-minute show featuring covers of songs from lots of different music genres, all played using our eight ukuleles and eight voices (and occasionally some kazoos to spice it up a bit)! More than a band, we’re a little group of friends and we have all worked together to prepare the songs for this year. When we meet up each week to rehearse during university term time, everyone has the chance to suggest a song to the band, and the diversity of our music tastes is definitely reflected in the set list we’re taking to the Fringe. We’ve got some real musical theatre nerds in the group, so you can expect some of that; we’ve also got some pop and classic rock fans; I like a bit of everything but the stuff I’ve personally brought to the band this year has been a tad more electronic. There’s something for everyone to enjoy!

We really love challenging ourselves and pushing the limits of what the ukulele can do. When people hear “ukulele band”, I think their mind often jumps to things like “Over the Rainbow” and “Riptide”. While we definitely have those songs in our book, our Fringe set list is made to surprise the audience. We want to get rid of the ukulele stereotype and show you that ukes can play a lot more than you thought! One of the “electro” songs I suggested this year is a classic 80s synth tune by Eurythmics; the version we’re playing is inspired by a ukulele band I greatly admire called George Hinchliffe’s Ukulele Orchestra of Great Britain. It’s not a song you’d expect a ukulele to be able to play, but I can guarantee “Knowing Me, Knowing Uke” will prove you wrong! As you may have guessed from our show title we’re also going to be covering some ABBA songs, in the form of a medley which we all absolutely love playing. It’s going to be great fun!

There are lots of other St Andrews student shows coming to the Fringe this year. I’ve been at the university for two years and I’m always surprised at how amazing and talented everyone is. Look out for shows by Bells, The Other Guys, The St Andrews Revue, and the St Andrews Gilbert and Sullivan Society (produced by the Mermaids Performing Arts Fund).