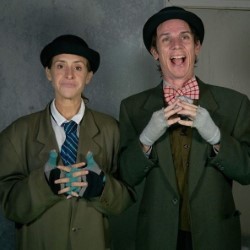 “Deane spent a magical year at the University of Edinburgh, living among the nudists at Hermits Croft and wandering up to Arthur’s Seat upon occasion.”

WHAT: “Keane & Doyle have been spies, wizards, witches and cosmological assassins. Now they embark on their most ambitious adventure yet: Twelfth Night! Unfortunately, upon arriving at the festive fringes of Edinburgh-land, they find that the rest of their company has been detained by security or lost to the pond. And so, they face the grandest questions of our time: Who will play which parts? Will they ever find home again? How many layers of cross-dressing is too many? They may need your help.”

WHERE: Paradise in Augustines – The Snug (Venue 152)

It is our first time to the Edinburgh Festival Fringe; however, Deane spent a magical year at the University of Edinburgh, living among the nudists at Hermits Croft and wandering up to Arthur’s Seat upon occasion.

Definitely this foray into the wilds of the Festival Fringe. We’re producing our own show, and it’s been an interesting challenge keeping all the balls in the air. Keane and Doyle have appeared in ShortLived (the US’s largest audience-judged short play competition), Plethos Production’s New Year Showcase, and Stony Brook University’s Science Playwriting Competition, but this is our first international venture.

Our show, as the name suggests, is a 2-person version of Shakespeare’s comedy, TWELFTH NIGHT. Coyne adapted it for the pre-existing characters of Keane and Doyle, who are sort of what you’d get if you mashed up Laurel & Hardy, Abbott & Costello, and Vladimir & Estragon in a big pot, and poured the result into two slightly oddly-shaped vases. Keane plays Viola, Feste, Maria, and Sebastian; Doyle plays Orsino, Sir Toby, Olivia, the Captain, a Clown, and the Officer; the rest are up to the audience. There’ll be improvised sing-alongs, clowning, and so many layers of cross-dressing that even we won’t know what’s what any more.

The company came together shortly after Coyne & Deane met doing Scott Munson’s updated adaptation of CHARLEY’S AUNT ’66 at the Douglas Morrisson Theater in Hayward, California, directed by Craig Souza in early 2017. They hit it off so well that since then, they have performed together in nearly a dozen full productions, including KEANE & DOYLE ARE SPIES, the characters’ debut, and last year’s A TIME FOR HAWKING at Indra’s Net Theater, in which they played Stephen Hawking and his wife-to-be, Jane Wilde.

2ELFth NIGHT is making its official premiere at Edinburgh, though it will have 2 preview performances in Berkeley, California. Though this specific show may not continue after the Fringe, the characters live on, making their next appearance at this year’s San Francisco Olympians Festival in SIR KAY.

At our venue (Paradise in Augustines), we recommend Some Kind of Theatre’s THE GRANDMOTHERS GRIMM, which restores the glory of the feminine to well-known folk tales; their group is based in Edinburgh, and took TWELFTH NIGHT to the Fringe last year! Also, our fellow Snug-dwellers the Raymondos are doing a show called ROSENCRANTZ AND GUILDENSTERN ARE PLEBS, which looks right up our alley: two fellows engaging in Shakespearean tomfoolery. Literally right after us is Windfall Theatre Collective’s MORE FOOL YOU, Pt. 1 & 2, which has time travel, gender-bending, and Tudor historical drama; we definitely want to know more about that, if we can only get there in time!

Wandering a little further out, we’re interested in our fellow Americans, 1850 Productions, and their show THE PENGUIN TANGO, a screwball comedy based on the real-life adventures of two male penguins at a New York zoo who decided to raise a chick together; that’s at theSpace @ North Bridge. Also coming from the US is New Light Theater Project’s HITLER’S TASTERS, about the women who had to test the Fuehrer’s food for poison; a dark historical comedy at Greenside @ Infirmary Street.

Also, there are several space-themed shows that we’ll be watching, because Coyne is obsessed with cosmology: Strickland Productions’ APOLLO: TAKE 111 at ZOO Southside; CHAIKA: FIRST WOMAN IN SPACE by Acting Coach Scotland at theSpace @ North Bridge; and SPACE JUNK: A SOVIET MUSICAL, which is one of Slipshod Theatre’s shows, at theSpace @ Surgeon’s Hall.

We have a bunch more that we’re going to see, and we’ll be talking about them a lot on Twitter: we’re using the hashtag #EdTwinge to mention shows that we feel are somehow our show’s long-lost twin.