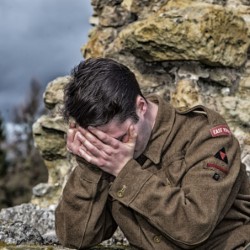 WHAT: “A verbatim play about ordinary young men in extraordinary times. Bomb Happy evocatively brings to life the powerful testimonies of five Normandy Veterans, inexperienced young conscripts who find themselves part of one of the most dangerous operations of World War II. As the action unfolds, memories – humorous and harrowing – collide, allowing a close-up experience of life on the front line, whilst wives’ accounts highlight the lifelong impact of PTSD. Post-show Meet the Veterans at Friday and Saturday performances.”

WHERE: Army @ The Fringe in Association with Summerhall – Drill Hall (Venue 210)

Yes it is! I’ve been to see many great shows at the Fringe over the years – but this is the first time I’ve ever had a chance to perform! Who’d have thought that, at the tender age of 62, I’d get a chance to realise my long-held dream to act in a show at Edinburgh Fringe?

Loads of things! I’ve been part of a nation wide live-streaming of ‘Bomb Happy’ the play we are currently bringing to the Fringe. It was really exciting. But a bit nerve-wracking as well. All the cast were aware of the audience watching from afar, but we also had to make sure we engaged with the audience watching the show right in front of us. This was just one of ten performances we did on our Edinburgh preview run.

The show, ‘Bomb Happy’ is written by a fabulous playwright called Helena Fox. ‘Bomb Happy’ is produced by Everwitch Theatre and it premiered in 2017 to a standing ovation on opening night and a sell-out tour. The unique feature of ‘Bomb Happy’ is that it uses the verbatim testimonies of five Normandy Veterans, who toured with the show. However, although the words are the true life memories of older men, their words are spoken by a cast of young actors who portray the veterans as their youthful selves on D-Day (June 6th 1944).

We are delighted that two of the Veterans (Ken Cooke and Ken Smith) will be attending performances of ‘Bomb Happy’ on, 16, 17, 23 & 24 August. Ken Cooke ‘Cookey’ is especially excited to be in Edinburgh as he was part of the Highland Light Infantry during the Normandy Campaign. My character ‘Queenie’ speaks the words of Ken Smith’s wife and sheds light on the dreadful impact of Post Traumatic Stress Disorder (PTSD) still experienced by many Veterans today. We’ll be very busy after Edinburgh, as we’ve already had requests to tour the show – and to some pretty exciting and unusual venues – including a huge aircraft hangar in a WW2 air museum!

All the diverse range of shows hosted by Army at The Fringe look amazing! We definitely want to see them all – and urge everyone to do the same. We’re also looking forward to propping up the Mess Bar and eating in the Field Kitchen at venue 210!