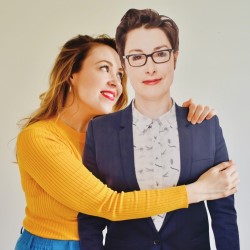 “It’s been an emotional roller coaster and an incredible learning curve.”

WHAT: “Inspired by true events: a passionate Sue Perkins Superfan, sent to a therapist to deal with her drinking, relays her adventures pursuing Sue. Fleabag meets Miranda in this fierce, heartfelt new LGBT comedy/drama. Follow our heroines impressive swagger skills, drinking habits and coping mechanisms in an age of social media, #MeToo and Brexit… In PurSUEt is a play with unexpected truth, nuance and hope. A searingly fresh new show that leaves the audience in no doubt: it is by facing our demons, we overcome them. ‘Step aside Fleabag. Hello InPurSUEt!’ ***** (Pink Elephant Arts). Simply Brilliant!” ***** (RadioGaga.com).”

I’ve visited the fringe the last few years – I love it. The innovation, the raw talent and energy – it’s always been a complete inspiration. It blew me away the first time I “arrived” on the mile. But this will be my first time bringing a show. And one that I have written, directed and starring in myself. Really excited to be on the other side this year – where I belong!

So since 2018 I’ve finished my masters degree at ALRA. That was pretty intense – but actually, the biggest thing to happen has been my show In PurSUEt.

It’s been an emotional roller coaster and an incredible learning curve. I can’t wait to finally get on stage with it. It’s the most rewarding thing I have ever done.

So my show is semi autobiographical about a time in my life when I was drinking heavily, having therapy and had a huge crush on Sue Perkins – and basically spent a lot of time trying to get her to date me! But on a serious note, the character has a drinking problem, which she is in deep denial over. So rather that facing that whilst in the therapy, she relays all her run ins with Sue to avoid facing her truth. It’s a story about redemption. And conquering your demons. And though originally based on myself, there is artistic license involved for sure. It’s creativity at the end of the day.

It’s a one woman show – so I’m running the whole shooting match! Writing, acting, producing, marketing – the works! Fortunately it would seem I don’t need to sleep for more than 40minutes a night at the moment… and I’m a crazy multi-tasker. It’s being produced by my production company: Bush Producirtons. An all female led LGBTQ+ film and theatre company. We focus on bringing new talent to the fringe. We are also passionate about mental health, bringing awareness to women’s issues and the LGBTQ+ community. This will be my first time performing at fringe – so I’m pretty excited to make my debut! I hope the show has a life beyond Edinburgh… I would love it if it could be developed further and turned into something greater. I think with all the material and buzz it’s created, there’s strong potential for development. The idea is quite unique. I would love if the show took on a life of its own beyond the fringe. But right now – i’m living in the moment, taking it one day at time, excited to see what happens next.

I’m really keen to see Me and My whilst I’m in Edinburgh. It’s an amazing new show written by two talented young women, dealing with the complicated subject of grief. Supposed to be really excellent. So I would definitely recommend that to them! Sooz Kempner is amazing also – and after her huge viral tweet she has really rocketed. We trained together, she has always been one of the most talented people I know. I’m really excited to see where she ends up next.