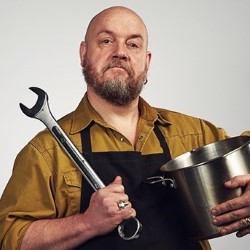 WHAT: “Brand-new comedy from the stand-up who cooks on stage. In this show he’s on the road! It’s time for planes, trains and automob-meals (sorry). George demonstrates how to cook with an engine, procure items from the train buffet trolley and turn unexpected roadworks into a picnic. Three plates of gourmet food cooked live in the most unconventional ways and with the opportunity to taste the results at the end, provided you can stop laughing. ‘Brilliantly funny’ (Jay Rayner, Guardian). ‘Trust us, you won’t believe how good the food tastes’ (Scotsman).”

Personally? My mum died. However this isn’t a dead-parent show, it’s a show about how to cook with a car engine, but a poem about my mum has snuck into it.

I’m a total one-man-band, so I devised, wrote, directed and perform the show myself, as I have with all three shows I’ve brought to The Fringe. And all my shows have been along the same genre-splicing lines. It’s part stand-up comedy show, part illustrated lecture and part cookery demonstration. Over the course of the show I cook three plates of properly delicious gourmet food but I don’t use any conventional kitchen equipment. And then at the end the audience get to sample what I’ve cooked. If they want to, at their own risk of course. No pressure. The show is premiering in Edinburgh and then it’s of on tour around the UK.

Well I’m into food so I’m going to give some culinary-based recommendations. Go to the Cheesy Toast Shack, they do the best toasties and they’ve got a few stalls around George Square and Bristo Square. There’s also a brilliant restaurant called ‘Field’ on Nicolson Street where I had an amazing meal a couple of years ago. If you want meat go to Saunderson’s Butchers on Leven St, they’re the nicest folk and they give me free meat for the show. Dig-In Bruntsfield do excellent veg (they’re providing me with ingredients too). And for bread go to The Wee Boulangerie on Clerk St. And don’t miss the one-off show ‘Dan vs Food’ at The Pleasance on 14th August at 1:30pm.