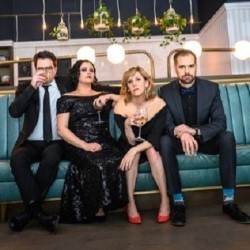 “We are proud of our baby, and excited to show it to the world, we are just hoping that people don’t think it’s got a smashed up face.”

Karen Parker and I have been to Edinburgh Fringe Festival one time before. I directed Flo & Joan a few years back and we wanted to surprise them so we booked last minute ticket to Scotland (from Canada), picked out our disguises and booked tickets for their show. After going to the WRONG venue, we made it just in time, to sit, slouched behind two big men to hide ourselves. We couldn’t laugh out loud because they know our laughs, so we were covering our mouths and cackling into our shirts. We must’ve looked mad. We ended up pulling off the surprise and having the most wonderful 72 hours at the Fringe!

Connor and Alastair haven’t been and boy oh boy are we going to make them do ghost tours!

I would say getting to perform both at Just For Laughs in Montreal and in Edinburgh Fringe in the same summer. Karen and I are leaving Montreal and coming straight to Scotland! It’s going to be a ride!

Also – (and this is from our press kit), but Sting crashed our photoshoot – it was wild! He walked right up saying “Are you the Lusty Mannequins?”. It was a real dream moment.

Our show is a sketch comedy revue, written by the four of us – Ashley Comeau, Alastair Forbes, Karen Parker and Connor Thompson (all Second City Mainstage Alumni). Lots of different scenes, covering several different topics – using all different kinds of comedy. We called it UNCOMMONWEALTH to mock about the fact that Canada (where we are from) is part of the Commonwealth, and to point out the humour in the unequal distribution of wealth across all forms.

We are self-producing so please tell everyone about the show.

The troupe started ten years ago with just Connor and myself and over the past few years, Alastair and Karen were added. We are all best friends (two of us married), who have dark sensibilities, funny brains and charmingly awkward personalities. We are JACKED UP over debuting this show at Edinburgh Fringe! We are hoping to tour this show post Festival.

We are proud of our baby, and excited to show it to the world, we are just hoping that people don’t think it’s got a smashed up face.

Songs in the Key of Cree (as part of the Canada Hub) – (because it is important to me to support Canada’s Indigenous artists and Tomson is absolutely brilliant).

Anesti Danelis: Six Frets Under, (a funny and talented musician and a downright sweet pea of a person)
The Big Gay Story Slam (I think it’s important to support LGBTQ+ stories and their allies!) (I am bi-sexual 🙂 )