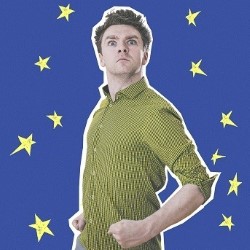 “In many ways the explosion of ideas an energy that people experience at the Fringe is what fuels the other eleven months of the year, for artists and audience alike.”

WHO: Fionn Foley: Writer and Performer

WHAT: “Brendan Galileo is determined to make his mark on Irish political life and save the local school of music from being converted into apartments for racehorses, by joining the ranks of the European Parliament. However, with his voice so lost in a sea of tribal bureaucracy, he must take drastic action to improve his public profile. He must represent his country in the most vicious diplomatic catfight on the continent, the Eurovision Song Contest. A hilarious multi award-winning new play by Fionn Foley about keeping your integrity at the world’s foremost convention of kitsch.”

This will be my first time performing at the Fringe, though I have been to Edinburgh a number of times- and at the Fringe. It really is one of the most joyous, eclectic and continually surprising places on the planet. In many ways the explosion of ideas an energy that people experience at the Fringe is what fuels the other eleven months of the year, for artists and audience alike.

I suppose what’s been particularly exciting is that when I attended the festival last year, the idea for Brendan Galileo for Europe was quietly percolating away. It’s an excellent place to be when you have the nucleus of a show in your head because inevitably to begin to pick up little fragments of inspiration or think about things in a different way. Like a wet dog running wildly through a hayfield, you come back with covered in bits of the experience scattered everywhere. So if you see a guy running around Princes Street covered in hay, that’s me trying to justify this allegory.

I am the writer and performer of Brendan Galileo for Europe. We have a great team on board consisting of director Jeda de Brí, Stage Manager Sinéad Purcell and Producer and Lighting Designer David Doyle. The show was a big hit in Dublin Fringe Festival 2018, where it picked up two awards, and we’ve just finished a National Tour of Ireland. We’re really excited to take it to Assembly and think it’ll go down really well with audiences who are looking for something energetic and zany, but who also appreciate political satire and a healthy injection of musical comedy. With audience reactions as overwhelmingly positive as they have been, we hope the show will have a long life at home and abroad. It’s always a thrill to perform and we predict it will really feel at home in Edinburgh.

They might need a bit of a rest briefly straight after- I certainly will as it’s a really high tempo performance. But I can definitely recommend some other brilliant shows that will also be Edinburgh-bound. Sarah-Jane Scott’s Appropriate at Summerhall is an absolute gem, as is Xnthony’s Confirmation at Pleasance. I’m personally very excited to see A Holy Show (Pleasance) and Tommy Tiernan at the Gilded Balloon. I also caught Electrolyte (Pleasance) recently, which you’d be mad to miss.