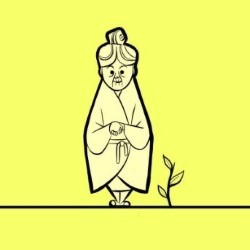 “I have a deep love for mushrooms, of all varieties. This comes after 26 years of thinking they’re disgusting. Now I’m all about them. Oyster, enoki, shimeji, shiitake. They’re all so good!”

WHAT: “A critically acclaimed puppet musical, inspired by a neuroscientist. ‘There are three deaths: the first is when the body ceases to function. The second is when the body is consigned to the grave. The third is that moment, sometime in the future, when your name is spoken for the last time’. Described as Death at a Funeral meets The Muppets, this intimate spectacle is as impressive as it is tender… with songs and vomiting puppets to boot! Three acts, ten puppets, one corpse. An unforgettable farce and a love letter to lives well lived.”

It’s our first time! Our first time in Scotland, our first time in Edinburgh, our first time at the festival, and the first chance I’ve had to actually meet my Scottish pen-pal of many many years. I’m so excited to get rained out in one of the most beautiful cities in the world. Well, almost ready. I definitely need to invest in some rain pants.

Well lots. I just spent 100 days being a dinosaur for Earth’s giant puppets at Melbourne Zoo (they’re gonna be in Edinburgh too!). So that was huge and fun and a constant workout. I also realised I have a deep love for mushrooms, of all varieties. This comes after 26 years of thinking they’re disgusting. Now I’m all about them. Oyster, enoki, shimeji, shiitake. They’re all so good!

The title makes it sound more serious than it is. It’s a comedy, with puppets, made for adults… about death.

We’ve performed the show at FringeWorld in Perth, Australia, two years running, and we did an independent season in Melbourne.

I wrote the script, and my friend Robert Woods wrote the score (which includes a few bangin’ songs we get the puppets to sing). Then I cast Perth darling, Nick Pages-Oliver to perform alongside me. He is my perfect foil, and great with the puppetry and the irreverent, relentless repartee.

We got a hot tip from some seasoned Fringe friends, and were so lucky to get Lee Martin of Gag Reflex onboard to produce our debut Edinburgh season.

It’s a really sweet show, but mostly it’s silly and wild and feels super loose, like a rickety rollercoaster. But everyone is safe, and it’s just quite joyous, and we want to bring everyone in to share the joy.

We know a few people from Australia who are doing good shows. Louisa Fitzhardinge is one of my best friends, and she has an incredible cabaret about grammar called Comma Sutra, which is making its Edinburgh debut. We have some musical friends who made Switch Witchetty’s Almanac of Everything, which is making its everywhere debut. And Erth’s Dinosaur Zoo will be incredible of course. We might know some other Aussie artists who are going and we don’t know they’re going yet.

But really, I hope you’ll consider seeing something you know nothing about, from people who are new to Edinburgh. Like us, sure. But like lots of other emerging artists too, who are making great things, and just need punters to take a chance on them. I hope you’ll take more chances after seeing our show!