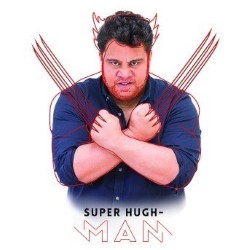 “I have a few festivals booked for when I get home but I have massive dreams to tour internationally, sharing this uniquely Kiwi story.”

WHAT: “A Maori boy’s musical about his Hollywood hero. An award-winning solo cabaret following the personal journey of a young Maori boy wanting to fit into a world he has no blueprint for. After discovering his hero Hugh Jackman’s secret identity, he comes to realise that it’s okay to be a different kind of man – that he can be strong and sensitive, he can haka and high kick, he can be fierce and fabulous. A shamelessly charming and heartfelt story, intricately weaving together comedy, storytelling, dance, song and Maori cultural/performing arts into a stunning cabaret experience.”

This is my second time playing at the Edinburgh Festival Fringe. I came over in 2017 with The Modern Māori Quartet and literally fell in love with the festival. True story. I got home after the festival and declared – YES DECLARED – that anyone working in the arts MUST visit the festival some point in their life. It’s a long way from NZ but I’m back this year, again with The Modern Māori Quartet but also, with my own solo show which I’m super stoked about.

Well, I was set to return to the festival in 2018 with the Modern Māori Quartet (this being their third year performing at the festival) but I landed a contract in the musical Jerseys Boys in Australia. So you could say that was the biggest thing that happened to me sings 2018 fest.

Well, funny thing is, I wrote this show in 2017 straight AFTER my first visit to the festival. I returned home so inspired that I wrote a show, It played as part of the Auckland Live Cabaret Festival, it toured, it got great reviews, and even awards and now, well here we are! We’ve come full circle you could say. My director, Jennifer Ward-Lealand CNZM, a well respected veteran of the Arts and President of the NZ Actors Equity has been with me from the start and I am currently being produced by the powerhouse company that is SquareSums and Co. I have a few festivals booked for when I get home but I have massive dreams to tour internationally, sharing this uniquely Kiwi story.

Of course, I’m going to steer audiences more towards New Zealand works. For a small country, we have some great exports and the festival has helped catapult some great NZ made art. Remember Flight Of The Concords? they’re kiwi, they also played the festival for years. This year we have a great contingent of kiwi comedians returning to the fest. As well as my mates at Trick Of The Light theatre co and Slightly Isolated Dog who continue to bring great kiwi work to the world stage. But OF COURSE I’m going to say, come and see ME, AGAIN, join the Modern Māori Quartet in their theatre show “Two worlds”.