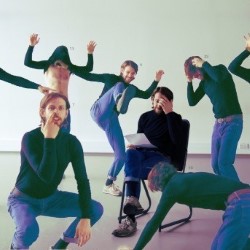 WHAT: “Footnotes are additional information at the bottom of the page. They can add some context to what is being discussed in the main text, helping the reader better understand the discussion or possibly suggest places for further research. At other times, they are frightening glimpses into what the author is really thinking underneath it all. Footnotes is a parody of an academic lecture whose verbose and dense language is frequently derailed by footnotes that could entail any number of diversions including, but not limited to, dancing, oversharing, surreal narratives or flirting.”

No, it is my… maybe 6th or 7th… third time doing shows though. In 2014 I was part of a comedy chat show called Conversation Garden where the audience members became the guests and in 2016 I performed my first solo show Of, or at, a Fairly Low Temperature which was a dance and comedy piece about trying to be cool…. some things have changed since them but I’m still trying… I must… we all must… it is our duty!

I’ve grown my hair long and recently bleached it whilst in Berlin (still trying to be cool) it’s shaken me to my core… I don’t know who I am anymore.

I wrote and choreographed the piece with some help from Inari Hulkkonen, Tiia Ojala, Olivia Winteringham and Jack Britton. It’s a fun show… surreal and obtuse but certainly fun. The company is just me so it came together when I decided to start making my own work… this mainly occurred because some people saw me improvising and took an interest in me and helped me to start making solos… and I just jumped at the chance because no one was casting me in anything haha.

The show has been produced by my friend and stand-up comedian Daniel Nicholas.

One by Nasi Voutsas and Bertrand Lesca
My housemate Nasi Voutsas is doing a show called ‘One’, he always makes inspiring
stuff with his friend Bert Lesca.

Conversation Garden on Love Island, A Choose Your Own Misadventure
I’m doing a comedy sketch show based on a choose your own adventure games and Love Island for the last ten days of the festival, it gets very surreal!