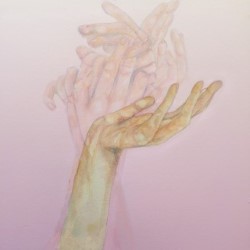 “This is our second time to the Edinburgh Fringe as a company.”

WHAT: “Nat and James work together, struggling against a possibly imagined attraction, without space to explore their chemistry. Dissecting the pressures of modern-day romance, Shadows sees Nat delve into fantasy in order to endure repeated rejection, never sure if James is flirting with her or if their coexistence is edging closer to friendship. As her expectations move further and further away from reality, Nat must try to break away from a life where she feels desperately stuck. When attraction isn’t as simple as love at first sight, how do our brains compensate for our innate desire to be loved?”

This is our second time to the Edinburgh Fringe as a company. Last year we brought our debut show ‘Other People’s Teeth’ to Edinburgh and, while it was sometimes a struggle to bring in audiences with us being so unknown, we were met with some really positive feedback and lovely 4 star reviews from The Scotsman, Broadway Baby and a few other publications, which was just amazing.

Since last year’s festivals we’ve been working on our new show, ‘Shadows’ and have had a week-long run at the Tristan Bates Theatre in London, which sold out its first night and once again received a number of 4-star reviews. It definitely felt like a big step in the right direction for our company.

‘Shadows’ was written by our company founder and artistic director Dan Sareen, who also wrote our first show ‘Other People’s Teeth’. The show depicts the relationship between two people working in a bar and is essentially about dreams, love and the distractions that we invent for ourselves. I’m the producer for the company but, in terms of bringing this show together, it really has been a collaborative effort between the whole production team, which is myself, Dan and our director Jess Williams.

The company came together through Dan, Jess and myself working together on shows while at university, and after seeing how well we worked as a team, we decided to try and have a go at doing it professionally. The show premiered at the Tristan Bates Theatre in London for a week-long run and we also performed a one-off show for the International Youth Arts Festival in Kingston. Preparing for Edinburgh has been such a big task that we haven’t really had a chance to think about where we’re taking it after.

Well firstly I have to do a shameless plug for another show that I’m producing with Chevron Theatre, which is called ‘One Giant Leap’ and it’s a brilliant satirical musical about the faking of the moon landing. It’s on at the Space on the Mile from the 12th-24th August at 7:40pm and is just so much fun and written and performed by some really talented young people (they, unfortunately, don’t have a twitter account but follow their Instagram @onegiantleapmusical). Our friends at Aireborne are bringing up two shows this year: ‘Shut Up Helen’ (5th-14th), written by Aimee Cross is a beautiful story about a woman dealing with mental illness, and ‘Tally ho, Secret Several!’ (15th-24th) which is a spoof of Enid Bylton’s ‘Secret Seven’ and sure to be terrific fun.