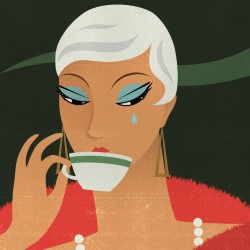 “The dream to write was always strong.”

WHAT: “Sally has enemies. Or she thinks she does. The problem is, they are all old friends. Gathered around a bistro table after 30 years of silence, five mothers pour out their parenting experiences for dissection. Motherhood may be the ultimate competition, but what’s the prize? Who’s done it well? Who’s plagued by regrets and who deep down wishes they had never done it at all? After an explosive run of Yen, Fourth Wall are back with a witty but strikingly poignant drama holding a microphone to the voice we seldom hear: the mother. ***** (TheBubble.org.uk).”

As a company Fourth Wall have made their way up to the Fringe many times, but as a writer this is my first debut which is unbelievably exciting! Their previous tour of ‘Yen’ was fantastic and it’s such an honour to follow such a strong performance on the fringe stage with Ladies Who Lunch. The play was written when I was sixteen, it was left (like all drafts penned by insecure writers!) in my desk draw for three years until I directed it and performed a three day run in Durham city. I never could have anticipated the reception that we had.

To have the opportunity for such a brilliant company to take my words and present them to such a dynamic and global audience is unreal. As a play that uses actors under twenty-five to embody older characters, the fact that the generation who the play painted were so moved by it was the most gratifying thing about the whole run. A teenage boy came and found me at the end of the final night and said ‘I never understood my mother until watching this’. That was a big moment for me. Many young women contacted me and asked me for a copy of the script as they wanted their mothers to read it and be able to say ‘now I understand you’. I never could have predicted that.

The biggest thing was probably the realisation that I wanted to be a playwright. It was the discovery that I had so many stories inside me that I wanted to share and that I hoped would be able to make an impact. Thus, Ladies Who Lunch was born out of my desire to explore the experience of the older woman. It was my sixteen-year-old self trying to document a struggle which I felt did not have enough exposure.

When I was growing up, the dream to write was always strong; from those first enduring images of a captivated writer banging away on an old Smith Corona in a Parisian coffee shop with an espresso and cigarette in hand (it was only later when you realise the Parisian apartment of your dreams has a rent hike, the espresso machine is broken and you’ve given up smoking for the sake of your lungs that reality really sets in!) When Ladies Who Lunch got the reception that it had that was the big moment for me to go; ‘maybe it’s okay for me to want to do this professionally.’

Ladies Who Lunch was written to explore the voice of the older woman. I wanted to ask some powerful and controversial questions about ageing and motherhood in theatre and explore the highs and lows of maternal challenges. The play centres around the maternal experience of four older women and one young mother; it’s witty but also poignant and I hope that many people will be able to identify with it.

The play premiered in Durham and is made up of a company of six exceptionally talented young actors, some of whom have the challenge and the most incredible ability to blend seamlessly into their roles as sixty and seventy-year-old women! My friend who turned sixty around the time of the premiere said it would never work, I was so delighted when she saw the play and said there had been not a single moment when she doubted they were the age of the characters… that’s the magic of theatre I suppose! We are also surrounded by a wonderful producing team of seasoned fringe creatives Hetty Hodgson and Charlie Whitehead (also both presidents of Fourth Wall Theatre Company). It’s an amazing team, I’m very lucky.

There are SOOOOOO many good things on at the Fringe this year but for me the ‘MUST SEES’ are ‘Tappuchino’ at Gilded Balloon, it’s hilariously funny and brilliant for families! On at Greenside with us is ‘Bost-Uni Blues’ by Ugly Bucket. I saw their performance at NSDF this year and it absolutely blew me away, clowning has never been so brilliant! Some amazing other Durham companies are bringing some brilliant work to Fringe this year including ‘Poseidon’s Playhouse’ and ‘Ophelia is Also Dead’, so many wonderful things to see, it’s going to be one hell of a summer!