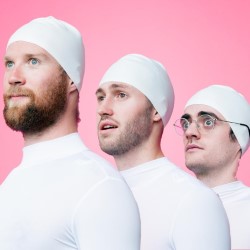 “There was one guy called Charlie who had been to the show 5 times, on his way back from work at night. So cool! Personally, that’s what I’m most looking forward to: the community aspect of the Fringe – being reminded by a tidal wave of creatives and performers that you are anything but alone.”

WHAT: “Attention all sperm! This is a military operation in procreation. Join three fun guys who fertilise in an adventure as big as life itself. Imagine Saving Private Ryan meets the sex education you wish you had, and they don’t wear adequate protection. Nine months later this show pops out. Don’t be ejacu-late, but don’t come early. The most physical comedy you could wish for, from the pr*cks behind the total sell-out Planet Earth III, Luke Rollason, Christian Brighty and Tom Curzon. ***** (EdFestMag.com). **** (VoiceMag.uk). ‘Made me cry with laughter’ **** (BroadwayBaby.com). ‘Hugely entertaining’ (Chortle.co.uk).”

This is our first time at the Fringe performing as a trio, but we’ve all been performing in Edinburgh for a few years now. Last year Bright Buoy ran a late-night clown cabaret called ‘The Wonder Jam’ in the Speigelyurt (a beautiful yurt run by Heroes (Bob Slayer and Lucy Hopkins)), where every night we’d create whatever we could with whoever was around, trying to elicit cries of ‘we were there when…’ and ‘I’ve been back every night!’. There was one guy called Charlie who had been to the show 5 times, on his way back from work at night. So cool! Personally, that’s what I’m most looking forward to: the community aspect of the Fringe – being reminded by a tidal wave of creatives and performers that you are anything but alone.

One of the coolest things was doing Stepdads (mine and Luke Rollason’s double-act) at the Leicester Square Sketch Off Final and the Musical Comedy Awards. Both finals held in enormous theatres with audiences expecting sketches and musical comedy. And Stepdads offering neither! We would go out in our knitwear, Luke holding his tiny children’s Casio keyboard above his head like he’d just won the world cup, and tear up the rule-book like savages. I’ve also learnt how to bake bread this year, Christian got his ear pierced again, and Luke managed to keep his phone off for an entire week once. Oh! And in Brighton, we were booked to play Privates: A Sperm Odyssey for mums and their new-borns. That was a pinnacle for sure.

Luke, Christian and Tom have tried to create the least sexy show about sex ever. It’s an action thriller and we are all dressed in skin-tight white spandex turtle-neck suits, pretending to be sperm on a mission to an egg. We dance around lots and occasionally our swimming hats pop-off. In the name of sexual education!

When we started making the show, the consensus was that our school sex-ed programmes were woeful and largely hijacked by videos of moustache-sporting, lab-coated men looking at their own sperm through microscopes. Something needed to be done! And then this show happened, and off we went to play at the Brighton Fringe. And then we were booked to play for the 300,000 people at Glastonbury, and hardly any of them came! So now we’d like our show to become part of UK school’s sex-ed curriculum. We could have a company of thousands of sperm actors and send them round the country.

It doesn’t seem quite right for me to plug Luke’s brilliant new solo show ‘Luke Rollason’s Infinite Content’ (12pm Monkey Barrel), so I’ll send you all off to see David McIver’s ‘Teleport’ at the Banshee Labyrinth instead. He’s just rewritten the show so that all the characters have a broken arm, and then he really genuinely broke his arm to do the show justice. I can’t wait. 12:20pm. Clashes with Luke so don’t book them on the same day.