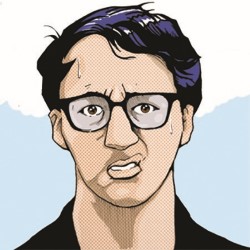 “I adore the festival (it’s why I keep coming back, it’s not for the love of flyering).”

WHO: Simon Caine: Everything.

WHAT: “Loads of male comedians struggle with women, but even more of them struggle to make their problem sound unique. So instead of writing a show about that, Simon has written a show about stories, memories and habits. He also just finished the best comedy course available: an unstable upbringing. ‘You’re a more authentic John Oliver’ (Doug Stanhope). ‘What you’re doing is great… the problem is nobody understands it’ (Iain Coyle, Dave Comedy Commissioner). ‘His paranoid persona is immediately entertaining, simultaneously relatable and bizarre’ (BroadwayBaby.com).”

This is my 4th time at the festival doing a solo show but before that I did 2 years of split bills.

I adore the festival (it’s why I keep coming back, it’s not for the love of flyering).

I look forward to being surrounded by a creative playground of likeminded humans who love to create and share ideas. I’m not looking forward to the first time I see my flyer dropped on the floor by a heartless punter who can’t find a bin.

Personal – I joined a gym and actually took an hour a day to go swimming and get out of my head. I can’t wait to do that again. It REALLY helps with your mental health.

Professional – I only made an £80 loss. Which sounds like a bad result but if you know anything about this festival you’ll know most people lose MUCH more.

Mundane – I did the 4th foodbank collection (where I ask performers to donate their leftovers to the homeless instead of throwing it away at the end of the festival) and after that was all done and dusted I managed to get Fringe Central to take it over (they have the resources to do it better, bigger and easier than me).

I wrote, produced, star in and created this show. The director is John Gordillo who has previously worked with Michael McIntyre, Reginal D Hunter and Eddie Izzard (clearly his career has gone down hill).

My main recommendations would be Bec Hill as she’s outstanding and should be more famous. Daniel Kitson but everyone who should know him already does. Oh and Max and Ivan as they do outstanding multi-character sketch comedy that nobody else can even touch.