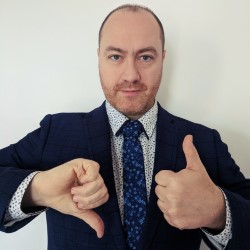 “This year’s show takes a step back from the detail and basically looks at why we’re all become worse.”

WHAT: “In a time when you can’t do right for doing wrong, Steve N Allen (as seen on BBC Two’s The Mash Report) takes a look at how hard it is to be better. When you want to be PC, right on or woke, it can be tough. Be better than a Weinstein. Be better than an angry Twitter egg. Be better than you. An entertaining and sometimes hard-edged guide to better better than. ‘Biting satire’ **** (ThreeWeeks). ‘Cutting wit’ (Time Out). ‘A performer with masses of talent’ (FringeReview.co.uk).”

I have done shows for a few years now but this is the most stand-uppy of stand-up I have done. In the past I have done shows that were topical comedy reviews of the year. I loved those shows and I’m grateful that one of them landed me the chance to get on The Mash Report.

This year’s show takes a step back from the detail and basically looks at why we’re all become worse. I know it doesn’t sound like an uplifting experience but I think it is when you get to the end of it.

I think we all know the right thing to do, but in recent years we have become skilled at finding a reason to do the worse things. We excuse it because we feel wronged, we think other people are worse, we think we can get away with it – come and see my show and find out how to be better than the worst people.

In the last year some of the basics have happened – slightly more weight gained, slightly more hair lost – but I have also learned to care less about those things.

I’ve been doing a topical comedy podcast with the BBC. Whenever I do podcasts I notice they are downloaded in lots of foreign countries. I get emails from people who listen in far-flung places. It seems my podcasts are useful in learning English. So in a few years, when lots of tourists come to the UK and have a strange East Midlands accent, I will apologise.

In a sense, this year’s show has been in the works for decades. Every time I have noticed something get worse – from people nicking tables in coffee shops before they have been served, the people who stop to work out where to go next at the top of an escalator, to the people who abuse their power at the top of the political system but make out they’re the victims – I have been working on a plan to be better.

Do I think my show will actually make the world a better place? Of course not, but you can only try.

Putting the bits of the show together has been some of the most fun times I have had on the stand up circuit. It’s been so nice to rant about the small annoyances, to open up about the losses in life and to talk about the joys of living through it all.

There’s a small tour of this show in the works. I’ll spread the word of being better than the worst type of people.

Go and see it all. See some political comedy like Erich McElroy’s Radical Centrist, go and see Pete Firman’s special type of comedy and magic (Pete Firman & The Amazing TBC). See a dance show that’s really experimental and you won’t understand it. See some late night comedy that is so raw you’ll feel bad for laughing at some of the jokes (Late N Live). What’s the worst that could happen? You’ll see a bad show but you’ll get a great story out of it.