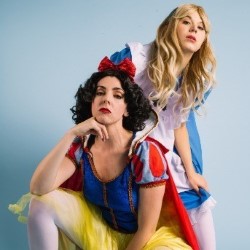 It’s 4pm on a Saturday. The sun is beating down through the window and drowning my laptop screen, but it doesn’t matter. After a half hour, I’ve got nothing to show for all my squinting and sighing except for unanswered questions: how do you talk about the incredible comedic restraint in a show that starts out with everybody being flashed? What kind of production simultaneously respects and ridicules its audience? How do you even begin to describe Princess Party?

The synopsis is simple enough: it’s a duo comedy presented by comedians Lauren Howard Hayes and Hannah Pilkes, about a rich kid’s birthday party that goes horribly wrong. The audience are the children, and sometimes the parents. You get to hold a cool flashlight. Telling you any more than that would be revealing far too much, and give Hayes and Pilkes too little credit.

Princess Party is a lot of things. It’s the best party you’ve ever been to, wrapped in the worst party you’ve ever been to. It’s like going to Disneyland, if Disneyland let in people who’d been drunk for three days. But most importantly, Princess Party is a masterclass in how to properly implement artistic restraint and make hard comedy look easy.

From the outset, the basic mechanics of the piece are excellent. With an impressive pile of acting, writing and comedy credits between them, Hayes and Pilkes are very visibly comfortable in their craft. Punchlines are crisp and well execution; physical clowning elements have complete follow-through; and everything is presented with a confidence and polish that can only come from collaborators who know how to fit into their genre like water in a glass.

And make no mistake, Hannah Pilkes and Lauren Howard Hayes are the show. It’s hard to nail down exactly what each brings to the table, but only because they jump from role to defined role like it’s child’s play. Pilkes plays the perfect dope, but her sense of comedic timing and verbal dynamics would make a razor weep. Hayes, who so effortlessly channels a living cartoon from the moment she’s on stage, can go acid queen in a single wig change. But what’s so truly excellent about this show, oddly enough, is invisible. To define it, we’ve gotta talk about nudity.

I have a lot of thoughts on comedic nudity. It’s not hard to pull off (you’re welcome), but damn hard to actually do well. Audiences have a level of shock fatigue, and if it’s not incorporated enough or relied on too heavily, it can come off as crass and lazy. Even worse, it can pull an audience out of the flow entirely. But in Princess Party, it’s funny as hell – It’s not played for too long, or too hard, and is so at home in its setting that you can only think “well of course this is happening”. Beyond the visible, it’s an incredibly impressive display of artists who know the relationship between shock and restraint.

So why is that important? Because it applies to every other joke and theme in the show. Controversial jokes and setups only stick around insofar as they’re funny, and never push themselves into bad taste. Do they toe the line? Pilkes and Hayes have basically built a big mansion on the line. But God knows they never cross it. It’s a testament to how tight and well crafted their material is, and a joy to watch.

The same goes for the multimedia portions of the performance. Despite a few visible command boxes, it’s seamless and ultimately serves its purpose without ever sticking out or dragging. As a cover for costume changes, its brevity only becomes more impressive.

Does everything in the show work? No. Because of the creative talent on display in other portions of the performance, certain skits (particularly the balloon artist sketch) seemed sluggish by comparison. Although these pockets of slowdown seldom lasted long, and were usually ended with some crackling improv, they were nevertheless noticeable in amongst the otherwise flawless wallpaper.

Princess Party is, if nothing else, a wonderfully crafted piece of entertainment. When I one day ascend to power and rule with neither pity nor mercy, it will be required watching for anyone who wants to be in a comedy duo, and/or anyone who thinks lavish parties for children are a good idea. Hannah Pilkes and Lauren Howard Hayes are damn funny people, and this show is a love letter to the hard work it takes to make that talent into something worthwhile. If you’re in need of laughter, this is the next best thing to nitrous oxide.