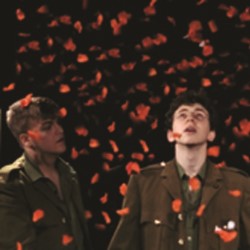 “The show is adapted from a Chekhov short story. We tried to capture his beautiful language throughout the show but our interest in physical performance inspired us to take it one step further and turn it into the light-hearted comedy it has become.”

WHAT: “Heartwarming, funny and bursting with energy, The Kiss tells the story of an unlikely friendship between two soldiers. After the timid Ryabovitch is mistakenly kissed for the first time, his world is transformed. Overwhelmed, the wallflower soldier stumbles into a magical adventure. When he tries to tell his story, his relationship with his cocky and overconfident friend, Lobitko, is threatened. Adapted from Chekhov’s short story, The Kiss cleverly blends physical comedy, live music and storytelling to create a fun and feel-good show that will have you laughing and crying all at once.”

Yes, this is my first time performing at the Fringe. I visited a couple of years ago with my brother. I remember being quite overwhelmed by the scale of it all. It was surprising but really made me want to perform there one day. I’ve been lucky to perform twice through uni in the Warwick Arts Centre and I’ve learned so much so performing in Edinburgh feels like a really exciting next step.

Tottenham getting to the Champions League final. Best moment of my life.

My friend and I started developing the show last year and eventually did a short run at the Hen and Chicken’s Theatre in Islington where we were really overwhelmed by the positive reception. That inspired us to perform it at Edinburgh for one final run. The show is adapted from a Chekhov short story. We tried to capture his beautiful language throughout the show but our interest in physical performance inspired us to take it one step further and turn it into the light-hearted comedy it has become.

There’s a load of other shows going from our university, Warwick. There’s the highly entertaining ‘Takin’ it Easy, 1916′ from Smirk Theatre. Pound of Flesh are putting on some cool gig theatre, ‘Fires our Shoes Have Made’. And coming from Warwick for its 6th year, the Improv Musical is always hugely entertaining.