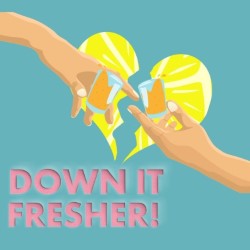 “Every August I see the town transform for Fringe as it gets filled with the most fantastic people there are; storytellers.”

WHAT: “After getting dragged along to the smelliest, most infamous night club in Edinburgh by her new friends, Frida the Fresher meets Matt, a posh English guy from the rival university. It’s love at first sight, but only for Frida. Grab your pals and a pint and come along on Frida’s journey as she tries to win Matt over and learns to navigate the many unwritten rules of university life without dying from alcohol poisoning. A hilariously honest play about being a student, falling in love and finding yourself. (And failing miserably).”

I am lucky enough to have called Edinburgh home for four years now, lured here by pretty buildings and a festival for every month of the year. Every August I see the town transform for Fringe as it gets filled with the most fantastic people there are; storytellers.

Living in a city like this there was only a matter of time before I got swept up in it all and here we are; my very first Fringe show with my own theatre company! Let the fun begin! (And also the stress. And the flyering. And the price increase on everything. (But mostly the fun.))

Down it Fresher! 2019 has been in the works for 1.5 years. Since the 2018 festivals, we’ve built this show and our company from the ground up, from rewriting the script to securing funding. It’s been a journey and a half, and a maddening learning process however, it’s been incredible to see our play go from just an idea to a full-fledged fringe production.

Down it Fresher! was written by myself and one of my best friends, Lisa Emily Petersen. We met when we were freshers at Edinburgh Napier University and what started out as morning after anecdotes quickly morphed into (somewhat) fictional characters and scenes. The play was first performed to sold-out audiences at Le Monde in November 2017. Following this, we were encouraged to take the show to Fringe, so we started our own theatre company, rewrote the show, found a wonderful Technical Director on Tinder and seduced him (that was all me to be honest) and now we’re here!

I’d definitely recommend checking out all the other PWYW shows as these performers have so much passion for what they do and there’s a ton of great stuff out there! A few local original shows that I’ll be definitely seeing this year include: