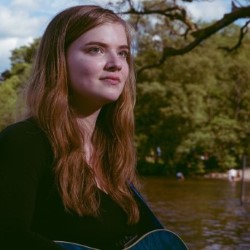 “Unfortunately, my attempt at being an official fringe busker wasn’t so great. Whilst I’m happy to perform to big crowds on a stage, my anxiety went into overdrive when having to navigate through them with music equipment to get to various busking locations.”

WHO: Lisa Kowalski: Your Role in the Production:I wrote and sing the songs and feel all the emotions they express

WHAT: “The cruelties of social media could have broken a girl’s spirit. Instead she picked up a dusty guitar and turned to song. Lisa Kowalski started writing songs at age 13. She soon turned to singing on the high street, where she found a kinder audience. At 16 she became a big player in the Paisley UK City of Culture bid. Before turning 18, Lisa had released her first EP and music video, won several awards for songwriting and been invited to represent Scottish youth music at New York Tartan Week. Lisa shares her challenges and triumphs.”

I’ve had some good times and some bad times performing in Edinburgh before. Highlights include bringing a multi-artist Taylor Swift tribute night to the city and performing for the John Byrne Award Summer Party and BBC at the fringe in 2017. Unfortunately, my attempt at being an official fringe busker wasn’t so great. Whilst I’m happy to perform to big crowds on a stage, my anxiety went into overdrive when having to navigate through them with music equipment to get to various busking locations.

This is my first time putting on a self-curated, solo music and stories performance at the fringe or anywhere. Historically when performing as a musician, I have said that I sing because I am no good at talking. I thought it was time to put that right.

The last year has covered quite a lot of ground. Musically, the second half of 2018 went well with a number of showcases at music festivals, such as the Killin Folk Festival and Dougie Maclean’s Perthshire Amber Festival. I released a single in November which is all about the tough experience of having your heartbroken for the first time by a person who seemed to enjoy making that experience as long and drawn out as possible. I did get a consolation prize, however, with some very high praise for the song from reviewers and a prize of £10,000 for reaching the Salute UK Musicmakers competition with it.

On a personal basis, only I could somehow manage to blend the lowest and the highest times inextricably together at the start of 2019. I fell in love with the most amazing person (and their dog) while at the same time having to withdraw from quite a lot of areas of my life due to depression. Luckily, I’ve come back feeling stronger, still in love and happy about my life again.

The show is basically the story of my personal journey since the age of 13 or 14 (the last five years) when I started writing songs and performing them. All of my songs are highly personal and about things I have felt and experienced so I will be weaving them together with chat about the underlying themes of my life during my teenage years.

These themes include dreams of achieving in a tough business and pursuing your dreams and your art when people tell you not to. Its about the risks of social media, both for teenagers in general and those who are trying to build a professional profile, about mental health, about how people can help each other and bring each other down, about girls with guitars and free spirits.

The show has a cast of one, written, performed, lived and medication taken by me. All other characters in the songs will not be performing on the day, especially the one who broke my heart so painfully!

Whether the show goes anywhere else in its current form depends on the success of the day – for now its “One Day” only. “One Day” was the name of the first song I ever wrote by the way!

There’s been some great female-led shows on social media giving support to other female productions.

I would recommend the following shows because they either portray some of the issues and challenges females face or have been put together by strong and creative females that I admire.

How to find Happiness (in a year)