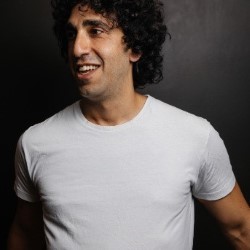 “His highest heights are high indeed.”

I had spent the day watching the world’s superlative sporting battle. No, not Nathan’s Coney Island Hot Dog Eating Contest – compulsive though it is – but England versus Australia for the latest installment in the immortal tussle for the Ashes. Nails bitten to the quick, beers had been drunk, nerves were shredded. It would be fair to say that my disposition towards our friends from the Antipodes was not imbued with the spirit of friendship which usually binds the Commonwealth.

Of course that old tart, Fate, likes to throw down the odd googly every once in a while to keep us on our tippy toes. So when I booked a last minute show at the Pleasance, I was brought face to face with the old enemy. The thought, however, of Ray Badran secreting sandpaper about his person was unthinkable. Indeed, seeing as at various points he took all of his clothes off I was visibly reassured he was on the level.

But what of his show?

The show was intimate  – maybe 50 people watching – which is probably to Badran’s strength. His self-deprecating humour lends itself to a tight venue, as does his crowd interaction.

It was a curate’s egg of a show. His ‘emergency joke’ was not a show saver as he joked but a showstopper. If it wasn’t so outrageous it would be a contender for gag of the Fringe. I just can’t see the Metro publishing bestiality. More is the pity.

His highest heights are high indeed. A hilarious tale about pretending to be disabled to fool his brother with inevitable results; a good riff on why so few things are measured in inches (I’ll never look at a Subway sandwich the same way again); using a YouTube clip to try and get an NI card; and a misplaced Deliveroo order were all genuinely funny. If he could have kept up that quality throughout we’d have a serious star on our hands and, perhaps, one day we will.

Other moments, though, weren’t quite there. His group work wasn’t as good as it might be. I suspect that he would be much stronger on home turf where he has the cultural references, the jokes about the town are obvious, the links clearer. After all, Australians can struggle in an English summer – or at least, here’s hoping.

Ultimately there’s little point asking where someone in the front row is from if you can’t spin it into a few gags. Given the young lady he picked on was from Aberdeen it wasn’t as though he was short of potential material but the section petered out. There were other moments when a joke didn’t work and he ended up joking about the failure. This is a good save so far as it goes but something you can really only do once per show. More than that and it serves a reminder to the audience that there is trouble at mill. A few of the longer stories fell flat. It really was a bag of revels.

That said, he’s clearly dedicated to the craft and confident enough to tell you what he is doing, telling the audience the stagecraft, and still get the laughs. Whilst the show lacked  a theme, being more a series of riffs, Badran’s final gag brought the show together – and drew both laughter and astonished applause.

It takes a lot in an Ashes summer to get a full-blooded Englishman willing an Ozzie on.  But I did. I liked him enormously and I think the rest of the crowd agreed
In cricketing terms, an Usman Khawaja rather than a Steve Smith. Moments of genuine brilliance amid some baffling choices which make you shake your head. You want to see more of him, you know how good he can be, and you look past the faults simply because you remember the perfect moment earlier on. Certainly – I’m very thankful to say – not a David Warner.