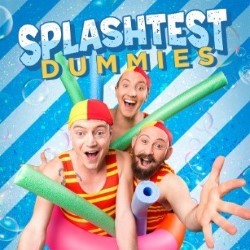 Reams of mum-blogs (dad-blogs too, but the mums are winning in terms of overwhelming numbers) will give chapter and verse on how parenthood changes you. Parenthood has certainly changed how I approach the Fringe. In the old days, I actively looked forward to the 5am finishes in clubs. Now I mostly worry whether or not the fireworks will wake the kids.

But whilst some of the Festival no longer is for you, a whole new side opens up. So I took my nephew (9) and my eldest daughter (5) along to the Splash Test Dummies. I will confess that we did so because my daughter liked their poster.

What a choice. I may start getting her to pick my shows purely on this basis. Splash Test Dummies was quite brilliant. It was everything a good Festival show should be. It had a bit of everything: acrobatics, unicycles, Cirque du Soleil-style gymnastics, running gags, good ol’ fashioned clowning, magic, puppetry, and slapstick galore. I laughed until I was hoarse. My nephew at numerous points said he was ”dying with laughter”. I may as well have not bothered getting my daughter a seat as she spent much of it standing in front of it clapping or laughing with glee.

The actors don’t so much breach the fourth wall but obliterate it. At one point, in a hilarious moment based around the Baywatch theme song, one of the three actors climbed through the crowd, stood on my daughter’s chair and bounced up and down. Later a man nearby had a (very sweaty) Dummy on his lap being hugged.

The ‘Rubber Duckie’ song was glorious as was the sketch with ping pong balls. A relatively simple magic trick taken to a whole new level. It may have been puerile but that’s the whole dang point. I laughed like a drain, as did my young duo.

There are water pistols, noodles, skeleton fights, skipping on unicycles and bubbles pumping out over you. The Dummies fire ping pong balls at you. It is an assault on your senses from before you even enter the tent.

All of this sounds easy but being this funny, this physical under lights for an hour is hard yakka in anyone’s money. More than that it isn’t easy. It is hard and the three Dummies clearly had bucketloads of talent and skill.

The three actors may look like they are clowning around but they do some seriously difficult stuff. Synchronised swimming on unicycles took the breath away as did some work with large metal rings. To make it all look so effortless is quite a skill. To do it and infuse it with comedy… well, it deserves the applause it got.

Apparently in reviews you should always give something critical lest readers think you are some professional fluffer or on the payroll. My one minor quibble – and this is true of almost every kid’s show – is that anything marketed for 5+ probably would be super if it were 45 minutes/50 minutes rather than an hour. I’m not sure what could be cut down or cut out but a few kids did start getting a little restless. Mine didn’t but I did notice a few around me beginning to turn. That though is universal and shouldn’t be held against the three magnificent Dummies: as I looked around at the end, the audience was grinning. The sort of grinning we don’t have enough of in life.

The Dummies have thought hard about how to entertain us and, importantly, our children. Even more than that, they delivered relentlessly. You won’t see a funnier, more joyous, more riotous, or more uplifting show this Fringe. My daughter spent the rest of the day pretending to be a Splash Test Dummy. If you’ve got kids, go. If you haven’t, borrow one from a friend. If you can’t do that, go along yourself. You’ll have a ball. I did as did my youngsters.