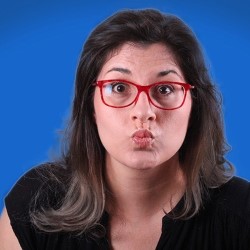 “I became friends with my online kidney crush! I got to know Nina Martinez on Twitter (she’s the very first living kidney donor with HIV). And then she CAME TO SEE MY SHOW Y’ALL!!!”

WHAT: “Amanda donated her kidney for her sister. But she wasn’t a match. Yet, she saved two lives. What?! Sounds like an incredibly heroic sacrifice, but Amanda loves attention, so it worked out for everyone. From carrying her urine on the NYC subway to enduring needle-happy nurses to passing resounding farts, this award-winning comedy questions what it takes to be a “hero.” Audience Choice Award, Frigid Fest NYC. ‘She may have donated a kidney to a stranger, but Amanda Nicastro still has her funny bone’ (AM New York).”

YES! This is my first time at Edinburgh Festival Fringe and my first time in Scotland! I’ve been to the International Orlando Fringe and this past winter I won Audience Choice Award at Frigid Fringe NYC. But Edinburgh has been such a different process… All of my non performer friends and my family ask me questions about Edinburgh like I’m the expert and I have all the answers. HA! HA! The reality is I’m learning as I go. I’ve got professional goals for myself but I’m probably most looking forward to networking with other artists. I already have an army of new twitter friends–can’t wait to meet them all in person!

I became friends with my online kidney crush! I got to know Nina Martinez on Twitter (she’s the very first living kidney donor with HIV). And then she CAME TO SEE MY SHOW Y’ALL!!! Let me clarify, she does not live in NYC, yet she came to one of my preview performances at 59E59 Theaters in Manhattan. (We both like unicorns!) She’s so cool, and it was nice to talk with someone who is as comfortable as I am being in the spotlight.

Meeting audience members after a show whose lives have been touched by organ donation in some way is the best part of my career right now. I get to hear their personal stories because I’m breaking the ice by putting my story out there for them. So many times I’ve had other living donors say to me, “you’ve put into words what I was feeling that I didn’t know how to say.”

I’m Just Kidneying is a solo kidney solo show about how I donated a kidney for my sister as part of a paired kidney exchange. It’s comedy that’s low on kidneys but big on heart.

I’m the writer, performer and producer. So many hats! But I have had some help. My development director, Frankie Johnson, really helped shape the initial run of the piece. My current director, Geoff Grimwood, has helped me finesse the mission statement and improve the flow of the show. My US stage manager, Christine Pynn, is a goddess of all things tech and production. My co-producer Tom Brennan has been instrumental in reaching the media. I’m ecstatic to bring on Joey Neill as my Edinburgh tech and stage manager. And I’m not sure if this show would even exist without the opportunity provided by SoloCom Fest in NYC which was founded by the wonderful Peter Michael Marino.

In the future I’m hoping to work with organizations committed to raising the profile of organ donation and transplantation. I’m also applying to several Fringes throughout the US and Canada for 2020.

There are two shows that audiences NEED to see after mine. First, check out Mimi Hayes “I’ll Be Ok” which is about how her brain exploded and her life during the aftermath. Mimi and I have had some very fun jokes together on social media about our various weird medical experiences. “I’ll Be Ok” is at PBH Free Fringe Bar Bados Complex Room 4 @ 12:00.

Secondly, “Werewolf: Live – Charity Spectacular!” on August 15 with all proceeds going to Kidney Research UK. Check ’em out @ Underbelly, George Square – Udderbelly 23:30. (If you can’t make the Charity Spectacular that’s ok they’re very funny see one of their other shows.)

I’m also looking forward to seeing Tami Stone – My Funny Bits, 2Elfth Night, Hitler’s Tasters the Play, Drowning the Play, and Samantha Hannah How To Find Happiness (In A Year).