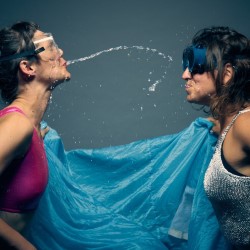 “Michelle’s identity was stolen as part of a fake news scandal during the Senegalese elections. Lizzy started a removals empire after buying a van and has developed one of the South East’s most loved/hated drag kings, Danly Steele.”

WHAT: “What happens when the glass slipper doesn’t fit? Is it time to put a bullet in the princess’ head? In a savagely playful subversion of identity, Lecoq/LISPA-trained clowns, poets and storytellers Lizzy Shakespeare and Michelle Madsen upend beliefs and expectations in a fantastic game, using clown, spoken word and live art to create a genre-defying work which teases and provokes. ‘Seriously challenging in the most ludicrously enjoyable way’ **** (BroadwayBaby.com). ‘I’ve seldom seen two faces quite so perfect for clowning’ (BrightonandHoveNews.org).”

It’s our first full Edinburgh run as Bait. Michelle took her poetry panel game I’m Sorry I Haven’t Haiku up in 2014 and has performed in the BBC Poetry Slam (she’s judging it this year). Lizzy has been up with a student show called Barry the Barrister/Barista and we came up together last year to try out a scratch of the show at the Free Fringe where the entire set collapsed on us and we got told off for borrowing someone’s projector screen.

Michelle’s identity was stolen as part of a fake news scandal during the Senegalese elections. Lizzy started a removals empire after buying a van and has developed one of the South East’s most loved/hated drag kings, Danly Steele. We’ve also started an absurdist cabaret club night The Office Party for Those Without an Office in the bloody heart of London’s live art scene, VFD in Dalston. Oh and we started going to EVE, an all-female wrestling training at the mad and brilliant Resistance Gallery in Bethnal Green…if you come to see the show you’ll see why.

We wrote the show together over the past two years. We met working on a street dance piece (Proactive Dance – the brainchild of Margherita Franceschi) and realised we studied at sister schools (Lecoq and LISPA) and were both trying to create genuinely feminist physical retellings of fairytales. We bonded over a shared love of leotards and a frustration at how women in fairytales always seemed to get screwed over…

So we started looking at our own histories and behaviours and how everything fits together. The journey’s been absurd, silly, joyous and sometimes really gruelling but we’ve created a crazy spell of a show that examines identity & questions archetypal behaviours that are really deep within us. It’s an experimental clown show with grunge music and a massive parachute. The subconscious is a dangerous place. We’re being produced by the amazing Roxanne Carney, a fellow East Anglian word person and theatre maker who also produces for Scottee and Rachel Mars, who we love. We previewed the show at two amazing feminist theatre festivals earlier this summer: The Party Somewhere Else at Nottingham Playhouse and a very, very sold-out show as part of the Calm Down Dear at the Camden People’s Theatre. Lizzy’s dad couldn’t get in, which teaches him to not book tickets in advance for our shows.

Two amazing recommendations in the Yurt – Butch Princesa by Andrea Spisto, Michelle’s Resonance FM cohost on Bears at a Picnic Naked and Laughing and fellow Latinx and the incredible Lucy Hopkins, our clown mentor and general golden goddess of the mad and good. We also recommend lovely clown Josh Glanc and the excellent Rachael Young whose Nightclubbing, an incredible exploration of Grace Jones and Afrofuturism, is on at Summerhall. We’re loving the witchy vibes at this year’s festival and can’t wait to see A&E Comedy’s Witchhunt. And CLAW, the Confederation of Lady Arm Wrestlers, which we are very much hoping to take part in.