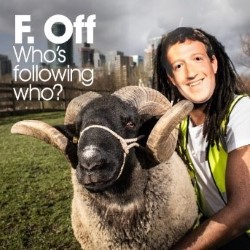 “The company came together after our membership auditioned via mobile phone self-tapes telling us what they thought about social media and then we spent a month workshopping and scratched the show for one night only at The Criterion Theatre in the West End, when Ian McKellen said it was the best NYT show he’s seen his years.”

WHAT: “F. Off. As the extremes of social media kick up an unsettling and unsavoury stink, Evening Standard ‘One to Watch’ writer Tatty Hennessy, National Youth Theatre Artistic Director Paul Roseby and Britain’s best young talent are kicking off in response in true interrogatory style to put Mark Zuckerberg and his social network colleagues on trial. The question is who really is to blame, and who is following who? So we ask you, the audience, to be the jury and the NYT company will be the disrupters. Served with a heavy helping of humour, some knitting and hardcore experts.”

My first ever Edinburgh was right next door to our venue this year on Cowgate actually, at the Grey Friar’s Kirkhouse. I was in a play called Respectable Wedding by Bertolt Brecht and we had to eat three courses of food each day whilst the furniture around us deliberately collapsed. There were some interesting actors in there as part of the Hoxton Players, at the time when Hoxton was somewhere you would very rarely go during the day, let alone at night. It was a mixed company [ages and abilities] with some fairly old actors at the time whose first jobs probably weren’t acting and quite possibly never their real jobs. Mixed with us first-timers, not least a wickedly cheeky actor called Neil Stuke who you’ll now recognise on many a TV series playing detectives and wearing raincoats. It was hard work but I loved it and it sold out. I also remember we played the track, ‘Perfect’ by Fairground Attraction every morning when we were getting ready in our bedsits. I don’t think it ever was [perfect] but we certainly tried to make it so. I’m looking forward to audiences getting up on stage and involved in our show, especially the magic trick. Oh, and I went on Christopher Biggins’ show this week, does that count as a namedrop?

Long story, that starts with getting an OBE and ends with my husband of 10 years dumping me. In between, I’ve protested outside a Government ministers office in Lisbon to prevent our dream home being destroyed. The use of oversized beach balls featured heavily. Witnessed my Mum of 94 years die, and my Dad of 97 years not. Lose over a stone in weight and reconnect with my 30-inch waist. Sadly no one else has yet to reconnect with it. Crashed a hire car in Suffolk but learnt to meditate in a shed. All in all seems appropriate then to be directing a show entitled F.Off!

It’s written by the brilliant Tatty Hennessy, dubbed ‘One to watch’ this year by the Evening Standard and as sharp and witty as they come. It’s produced by the National Youth Theatre, the world’s first and best. The company came together after our membership auditioned via mobile phone self-tapes telling us what they thought about social media and then we spent a month workshopping and scratched the show for one night only at The Criterion Theatre in the West End, when Ian McKellen said it was the best NYT show he’s seen his years. Where next, who knows, Broadway!?!

There’s some amazing young National Youth Theatre talent at the festival in other shows this year, here are just a few:

Katie Greenall fresh from working with us on Spoken World at Latitude is her with her hilarious show #FATTYFATFAT at The Pleasance AND she was on the Guilty Feminist Podcast this week too!

Alice Vilanculo is another one-to-watch from our 2019 REP company and is in E8 at The Pleasance directed by our talented Associate Artist Ria Parry. Our company show the show this week and loved it.

There was never a day without shrieks of laughter in the NYT office when the brilliant Ben Salmon was the assistant on our flagship social inclusion course Playing Up. Catch him in Miller and Salmon at Just the Tonic at The Charteris Centre at 16.40.