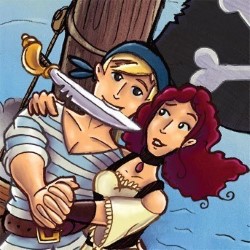 “The whole experience proved to be a little disappointing and I distinctly remember saying to myself that it would be the last time I would do Edinburgh…. Whoops.”

WHAT: “Ahoy! Join John Silverman and the crew of The Maiden’s Ruin on their quest for pirate booty in a bawdy tale of love, betrayal, murder and incest! This five-star adult musical-comedy returns to Edinburgh after its 2010 maiden voyage, bawdier, funnier, boozier, and pirate-ier than ever before. Chock-full of original songs, filthy wit and swashbuckling fun; climb aboard for a boat-rocking good time! ‘Full to the brim with creative genius’ ***** (TheReviewsHub.com). ‘Ingenious… Monty Python meets Pirates of the Caribbean’ **** (FringeGuru.com). ‘Utterly ridiculous in the best possible way’ (FringeReview.co.uk).”

I have personally been up to Edinburgh twice before. In 2008, I brought up Plague! The Musical. This was my first experience of the juggernaut of writing and producing at the Edinburgh Fringe. It was a rollercoaster of emotion: big audiences and great reviews followed by bizarrely empty theatres and brutal feedback. We took to wearing the latter as a badge of honour. Overall though, Plague did really well in 2008 and was named a Sell Out Show. Therefore, two years later, I returned to Edinburgh. Again I brought up Plague and this time I brought up my first production of Piramania! The Swashbuckling Pirate musical. This time, running two shows in rep (alternate nights) proved to be a bit of an error. Despite being happy with both shows, neither was able to gain a critical mass of audiences and reviews. The whole experience proved to be a little disappointing and I distinctly remember saying to myself that it would be the last time I would do Edinburgh…. Whoops.

The biggest thing that’s happened to me since last year is that I’ve moved to New York City with my day job. And, of course, I then decided that would be the perfect time to bring my musical back to Edinburgh after 8 years of actually being in the same country. As a result I’ve been producing remotely working with a fantastic team back in the UK. I’m now in Edinburgh helping get the show up and running before I return Stateside.

The show is Piramania! The Swashbuckling Pirate Musical. It tells the story of a young man, John Silverman, who gives up his life to join a bunch of pirates but soon finds that pirates (and family members) are not to be meddled with. I initially co-wrote it with Tim Frost back in 2009-2010 and, as I mentioned above, we performed it at the 2010 Edinburgh Fringe alongside my other musical, Plague! The Musical. Despite getting a great response we never felt it had enough of an opportunity to spread its own wings so have long wanted to bring it back. In 2015, Tim and I started working with director Alex Howarth and orchestrator Mark Aspinall on a new, longer production for London. This took a few years to complete and, last year, we decided it had been so long that we should give the show another shot in Edinburgh first. What we are presenting is now a fully orchestrated version of the show performed by 10 incredible actor-musicians.

The Fat Rascal musicals – Unfortunate and Vulvarine – are absolutely hilarious and silly and fun and would definitely appeal to our audience. We also really loved the Royal Conservatoire of Scotland production of Legally Blonde.