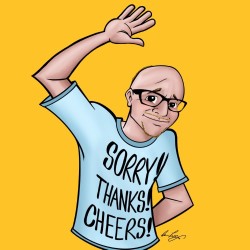 “I had just started chemotherapy during last year’s fringe – I thought at the time I looked great. Having reviewed the photographic records turned out I looked like a duck egg wearing spectacles.”

WHAT: “Aspiring to be more vacuous? Thanking strangers for no reason? Hyper-Nice is a new, original, one person stand-up show in which David Watson mostly apologises for breathing and tries to be “nice”. It seems sorry is not the hardest word. Incisive social comedy.”

I’ve been to the festival 5 or 6 times, as a punter and as a writer and director, but I’ve Never performed before. I’m doing a 1 man show, having done a bit of stand up in the past, mostly at home in Liverpool. What am I expecting? The ticket sales for my week look ok, but I’m all over the 2 audience members on a wet Tuesday situation and expecting it again. Doesn’t bother me one bit (he says now). I remember late-night drinking and possibly the best funk disco I ever attended in my life with cans of red stripe being distributed from dustbins – different times. I remember the faces of the poor residents marching past curiously dressed promotors with looks of disdain.

This answer was going to be straightforward until I read the stipulation “try and make the reader smile”. I had just started chemotherapy during last year’s fringe – I thought at the time I looked great. Having reviewed the photographic records turned out I looked like a duck egg wearing spectacles … and the weight loss was nowhere near sufficient for my purposes either. Anyway, much better now and I guess this 45-minute show (WHICH CONTAINS NO MENTION OF CANCER) is a reaction to that, I may as well just as well be jumping out of a plane or seeking to ride a bull…

It’s a one-man stand-up show written and performed by me, and it contains, I would say, moments of genius, and, it will probably transpire some filler. It’s about being gauche and English and apologising too much, and getting off on the gratitude of others.

I did a free Liverpool show two weeks ago to about 90 mates and mates of mates. It was fun and chaotic, and I’ve toned down the swearing. No plans for after the fringe yet Burt probably a London show at some stage … and a lot of radio work (that was a joke).

Jonny Pelham: Off Limits – amazing subject matter, which doesn’t sound like it should ever be the subject of comedy, which is why it should.