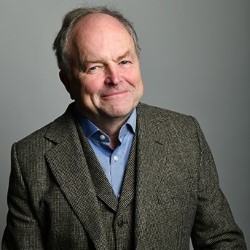 “If Prime Minister* Ken Clarke’s Hushpuppies were an EdFringe act, this might be it. Stylish, comfortable, unthreatening, finely-crafted, and ex-barristery.”

“So who is Clive Anderson?” my companion drawls Mid-Westernly. “He’s a pretty big deal,” I reply. “Ex-Footlights. Ex-Barrister. He interviewed Gorbachev. Not exactly a national-treasure, but definitely a favourite national tea-mug that’s been in use down the ages.” My companion looks blank and I recall the look on the guard’s face at the National Portrait Gallery when she asked him, “Sir, where are the famous people?”

My own personal favourite tea mug had been purchased from the EUSA shop, not a stone’s throw from where we stood behind a long queue of expectant punters. Said mug, which advertised that the Guardian newspaper could be purchased by students for 20p, saw service in both the undergrad and postgrad campaigns, toured the provinces during the lean years, and saw service in every rented cupboard and shabby (but not chic) dresser, right up to the forever house, with it’s surprisingly grabby preschoolers and less surprisingly unbouncy kitchen floor tiles. It’s currently helping to drain the soil for a scented geranium. It’s fair to say that my cherished mug has seen better days.

So what of the nation’s favourite tea mug, Clive Anderson? In what state will we find him? Faded? Chipped? Bitter from some sod putting making instant coffee in him and not washing him out properly?

The former chat show host and chair of Whose Line is it Anyway? arrives on stage dressed like what Henry Irving thought Macbeth dressed like. Pause for breath and… vroom! he’s off with the same stately, but dynamic energy as one of those Bentley motorcars he tongue-in-cheekedly plugged in a Christmas episode of HIGNFY. A lifetime on the after-dinner circuit and he’s cornering with precision, racing down the straights with material that is well-worn without being tired, homely without being plain. If Prime Minister* Ken Clarke’s Hushpuppies were an EdFringe act, this might be it. Stylish, comfortable, unthreatening, finely-crafted, and ex-barristery.

*apologies I watched the next episode from the Brexit box set while you were out.

Anderson opens with a learned essay on his favourite Shakespeare play, Macbeth. Not super researched, the historical Macbeth went to Rome and not the Holy Land, but sufficiently well remembered to open onto a scenic landscape of showbiz reminiscences and anecdotes. It is a very pleasant hour and we all leave pleasantly pleased… with one exception.

“This is just like that time you took me to see that Gyles Brandreth dude!” complains my companion. “This guy was good, and I get that he’s a big deal on your side of the pond, but did no one remind him that the people sitting stage right also paid for their seats?” Her case for the prosecution presents a litany of minor (and not so minor) staging errors, her criticism of Anderson’s admittedly frantic pacing is crushing, and her insinuation that the fowl specimen of wretched humanity in the dock has been driving without due care and attention of his director may stick in the jury room.

This is not objectively a *5 show from her technical perspective. Subjectively, however, if you are in the market for a Clive Anderson product this EdFringe, this is an excellent vintage. If Jack Pomeroy were selling it in his wine bar, it would deliver considerably more than his regular Chateau Thames Embankment. Chateau Clive Anderson has many finer seasons in store and I can’t wait to try them.