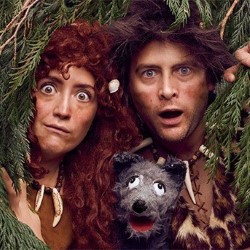 “Tooth and Claw are (almost) as real and as cute as the terrier asleep on the hearthrug. Their puppies would melt the heart of an ice giant on top of a glacier, in deepest Narnia in the coldest days of the late, unlamented Queen Jadis.”

If I could meet anyone from history, absolutely anyone, I should like to encounter with the individual who invented the shelf. Two brackets, one surface. Someone had to come up with that. Who were they? Where did they live? What did they plan to put on their novelty? Family Fringe favourites, Fideri Fidera, have a better answer. If they could meet anyone in history it would be the people who invented the dog. Those crafty hunter gatherers who, back in the day, when all the world was a garden, turned the ferocious wolf from a predator into a companion.

Ogg ‘n’ Ugg are out and about doing what they do best, getting tea ready. Watching the two legs are Tooth and Nail, two wolves wondering why omnivorous humans have to also eat meat which is the carnivorous wolfies’ only source of food. At the campfire that night the two sides of the equation begin to figure out a solution to the puzzle.

Fideri Fidera are not Fringe favourites for nothing. Every aspect of the production is marvellous. From the acting, which is pitched perfectly to the wide-eyed wee ones; to the puppets and puppetry, which are in turn beautifully constructed and wondrously brought to life; via the story itself which is full of heart and smiles.

The set is complicatedly simple. Two moveable and reversible panels dressed with leaves and undergrowth, vines and creepers. The lighting is liquid, washing all with a richness that transports us from the nondescript setting of the Teviot Dining Room in Fringe time.* But it’s the puppets that steal the show. Tooth and Claw are (almost) as real and as cute as the terrier asleep on the hearthrug. Their puppies would melt the heart of an ice giant on top of a glacier, in deepest Narnia in the coldest days of the late, unlamented Queen Jadis.

*49 weeks of the year the modestly grand dining room is considerably more interesting than the SRC meetings I used to attend in it.

Daughter 1.0’s first ever theatre production was Fideri Fidera’s Oskar’s Amazing Adventure. Now aged 4 Oskar continues to loom large in her imagination. It’s not yet clear whether the slightly fuzzier, more meandering, narrative at the heart of Ogg ‘n’ Ugg ‘n’ Dogg will stick as well. There is no doubting however that the show captured her in the moment. As the first crucial steps are taken on her (hopefully) lifelong journey through the arts I can think of no one I trust more than Fideri Fidera to keep her engaged, entertained, and excited.