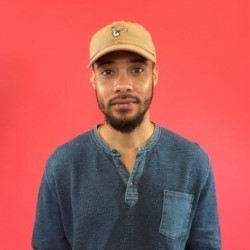 “I’ve performed it quite a bit in the states over the past few months and mostly audiences have booed me and called me a whore. That has nothing to do with the material though, they just don’t care for me as a person.”

WHAT: “Langston Kerman discusses the unexpected revelations coming from living with a convicted sex offender, questioning how these discoveries might prepare him to be a better man in the world, a better lover in the vagina and a better husband in his pending marriage. Best known as Jared from HBO’s Insecure, Langston has also starred in High Maintenance, Seth Rogan’s Singularity and Adam Devine’s House Party, and has written for the Oscars. His show Lightskinned Feelings was one of Vulture’s Top 10 Comedy Albums 2018. ‘You’ll want to hear what the man has to say’ (Paste).”

Yes, this is my first time in Edinburgh. And over the past three months, I’ve been hit with an unending wave of terror struck warnings as people prepare for the hardships I’m about to face. Half-empty rooms, unflinching reviewers, discarded flyers exploded across the ground like the corpses of Mel Gibson’s painted friends in Braveheart. Mostly, I’m just excited to tell jokes, listen to some shit I’ve never heard, and maybe find a black barbershop. I really believe in my hour, and hopefully, a chance to run it every day for a month is going to make it so that other people really believe in it too.

I got engaged almost a year ago to this day, which is probably the biggest thing to ever happen to me, and may explain why my writing has mostly been about that. I’ve to get these jokes out now before our bank accounts are fully joined and she finds out that personal debt isn’t just a silly “bit”.

This will also be my third international comedy festival in the past year. I’ve gotten to drink Guinness in Dublin and pet koalas in Melbourne and now I get to stare at old castles in Edinburgh and whisper Harry Potter spells under my breath.

Oh, also this year I found out that prunes are just dried out plums. That honestly was a huge game-changer for me.

My show is called The Loose Cannon. It’s at the Underbelly every night at 7:45pm. I wrote the whole thing by myself, which is why so many of the words are misspelt. It’s about falling in love and sex offenders and somehow trying to find the happy medium in-between those two things. I’ve performed it quite a bit in the states over the past few months and mostly audiences have booed me and called me a whore. That has nothing to do with the material though, they just don’t care for me as a person. In all seriousness though, I’m really excited to follow this Edinburgh run with a run of as many clubs and rooms back home. This feels like a perfect way to sharpen what has already turned into a pretty cool sword.

I’m excited to check out so many awesome comics while I’m there: Liza Treyger, Dan Soder, Catherine Bohart, Emmy Blotnick, Sarah Keyworth, Sean Patton, Dr. Phil, Mr. Clean, The Muppets if they’re performing. I don’t know, there are a shit ton of shows and I just want to get high after my sets and watch them all.