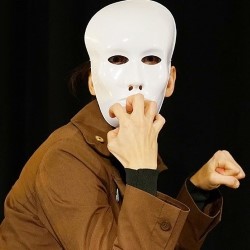 “I rediscovered my love for surfing. I LOVE IT. It makes me feel at peace and it is the perfect time-out. Of course, I don´t look very graceful on a board (yet) but it is all about the fun and the balance in life.”

WHAT: “A fictitious talk show with a live audience, featuring a guest from the afterlife. Impossible? Maybe exactly as impossible as the image of the ideal woman, a topic that the play seeks to address. The highlight of the evening: Käthe Petersen. A seemingly selfless social worker who was active between the years 1932 and 1966 in Germany. Behind the facade of medals lies a bottomless pit… Against the backdrop of this historical figure, we put concepts such as female sexual self-determination up for discussion.”

It has been a dream of mine to perform at the Edinburgh Festival Fringe for a while. So I visited Edinburgh last summer to get a feeling for the Festival before actually participating and I think it helped in terms of preparation and I am now super excited to be here for the full run.

I was very proud that for the very first time a play I had written, had been translated into English – this is how TABU became TABOO, and I started to prepare my tour to Brighton and Edinburgh. 2018 I also rediscovered my love for surfing. I LOVE IT. It makes me feel at peace and it is the perfect time-out. Of course, I don´t look very graceful on a board (yet) but it is all about the fun and the balance in life.

I wrote TABOO after stumbling over an article about a little known but very influential woman during the NAZI era and beyond. She fascinated me so much, that I started researching and one year later, I had a one-woman-show on my hands. It is special to me, as it gives victims of that time a voice and unravels a part of history, that has been widely overlooked but still has an influence on what we expect in women today.

There are a lot of amazing one-woman-shows at the EdFringe this year. I have seen a view and my favorites are “Love Bites” which is a mix of cabaret and variety beautifully performed by Fifi Larouge and “Brandi Alexander” by Tatiana Pavela which moved me deeply as it takes a brutally honest look at the aftermath of rape.