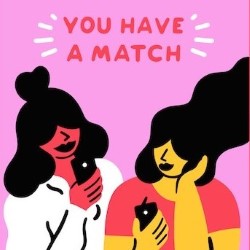 “The play has gone from strength to strength, we’ve changed up the ending and developed the characters so they are even more well rounded and, we hope, charming.”

WHAT: “Two girls take on the world of app store dating. In a society where its easier to swipe right then say ‘Hi, how are you?’, where is the line between a serial dating addict and someone longing for more? Tegan is straight. Riley is gay. They have been best friends since their school trip disco disaster and have shared everything: from fake tan mitts to condom collections… except sexual conquests. Watch as they deconstruct their co-dependency, pack for the dating trip of a lifetime, and swipe through the world of easy hookups and awkwardly going dutch.”

It is indeed! For half the company (there are only two of us) it’s her first time in Edinburgh full stop. For the other, she’s been up a fair few times to watch things but never to perform. We sold out our run in London last year at The Bread and Roses and then did two very successful runs of the show at Theatre 503 and Canal Cafe, and decided it was time to tick something off the bucket list and bring You Have Match, written and produced by us, to the Fringe!! Thus far – it’s been an adventure, it is as intense as we expected with a little more sunshine than anticipated so that’s been a delight. Today is our first day of the run and we are very excited to get flyering! Come at us Edinburgh!!

No I joke, we’ve had a good year, we’ve both started new muggle jobs that are slightly less soul-sucking than the last, Nush’s boyfriend moved into her flat with her and Zoe (that’s me) has bleached all the colour out of her hair and now regularly get’s mistaken for Swedish – so that’s fun!

The play has gone from strength to strength, we’ve changed up the ending and developed the characters so they are even more well rounded and, we hope, charming, and we had an incredibly successful preview at Theatre 503.

We wrote it. We produced it. We sing the theme too.

We met in a restaurant in 2016, in the middle of August, when we’d rather have been doing anything else than putting cutlery out at 9 o’clock in the morning. Anuschka’s first words to me were ‘I don’t usually train the newbies’ and with that, a great friendship was born.

About 6 months later, just after I got fired (if you ask me I will tell you why – it makes me laugh) we pooled their creative minds, put pen to ordering pad, poured out the Savvy B and decided to take on the world of New Writing. And the rest is, as they say, a hangover.

We performed You Have A Match at The Bread and Roses last year and sold out all 3 nights! We have also been part of The Pub Theatre Festival, and we’ve performed at Canal Cafe and Theatre 503. Our goals for 2020 are taking the show to The Vaults festival, and a small scale national tour (if we can get the funding! Don’t think we’ll be able to do that on the fly like we did this year.) and then we do have plans for a potential web series down the line. But all in good time my friend, all in good time.

Unless you’re our parents, who’ve seen the show about 20 times between them, no one needs to come back and see us again – we’ll be happy with the once!

We highly recommend Tumours, a play about a girl about to turn 27 who is convinced she is going to die and join the 27 club, even though there is absolutely no reason for her to think that in a logical world! It is so beautifully written, and laugh out loud funny with the same heartwarming love at the centre of it that we hope You Have A Match has. Ashleigh is a brilliant writer, and her piece is glorious, and we implore everyone to go and watch it.

I think our last recommendation would have to be I’m Coming because quite frankly, a story about the journey to a woman’s first orgasm is something everyone needs to see! A male friend of mine and his girlfriend went to see it yesterday and he said he was ‘enlightened!’ with eyes wide.