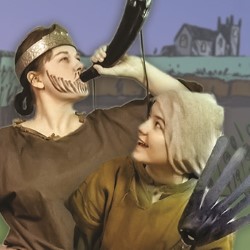 “Stuck in traffic on the A14, I’ll never look at East Anglia the same way again.”

At a rainy BBQ in Newcastle, en route to #EdFringe, I heard one auld pal explain where they lived, “it’s up the road from A. You know, down the way from B.” Up and down don’t enter the conversation much in the part of East Anglia I’m from. Not when it comes to directions. ‘Flat’ is the word. ‘Eels’ is another. The town of Ely is named for them. Dutch navigators, the digging ditches rather than the exploring East of Suez kind, put in the channel and loads which took care of the water but they didn’t get round to putting back the hills. I say putting back the hills because there were once hills in East Anglia, something I didn’t know until seeing ‘The First King of England in a Dress’.

We enter to find a wicker eel trap, eel spear and other assorted must-have items from the time when Saxons and Vikings lived in close disharmony a thousand or so years back. We are greeted by the actors, who put Daughter 1.0 (aged 4) and the other kids instantly at their ease. We are in for an hour of smashing storytelling set in a land divided and a country ready to be born.

Ethelred misses his mum. She was stolen from him by something worse than Vikings. So when a stranger asks his dad for a bed for the night, he is naturally nervous. But when the stranger and Ethelred start sharing stories of giants, frogs and magic, it isn’t long before they discover surprising secrets about each other…

Together actors Kate Madison, Chip Colquhoun, and Izzy Dawson craftily conjure a bygone age into something both comprehensible and real. Chip is the author of three books, one of which inspired the stage play. His writing style is hugely engaging, weaving big historical themes into material that is finely tailored to his young readership. The other two tomes are already Amazon Primed and on their way to Christmas stockings. A finicky reviewer, which I am, would suggest that the foreshortening required to fit EdFringe’s shorter timeslots could have been finer, but the kids didn’t seem to notice or care.

They were too busy being engrossed in making squelchy sounds to compliment characters walking through muddy bogs, and helping the cast out with their improvised make-up, mop wigs and hidden crowns. The kids are all having a great time, although some of the adults might have prefered fewer demands for their on-stage presence.

This adult, however, is extremely grateful to ‘The First King of England in a Dress’ for opening up the world of East Anglian folktales. It’s more than a little special to exit an EdFringe show considerably wiser than when you went in. Stuck in traffic on the A14, I’ll never look at East Anglia the same way again.