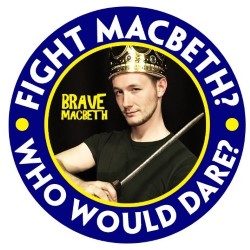 “The performances alone would make this a five-star experience, but it’s what’s gone on off stage that makes it truly outstanding.”

EdFringe is a time of reunions. Friends auld and new set aside their politically-inspired social media spats and bad-tempered artistic differences in order to share in the world’s leading cultural banquet. Shakespeare is (as ever) the ghost at the feast. The Bard generously provides something for everyone, but a scheduled encounter with him can bring on all the premonitions of a Christmas dinner to be spent sitting between the know-it-all cousin just back from their first year at uni, and the slightly racist uncle who doesn’t understand why things aren’t the way they used to be. How to introduce Daughter 1.0 (aged 4, nearly 5) to the bard? Too light and she’ll miss the expert heavy lifting of his scripts. Too classical and she’ll be lost. Enter Captivate Theatre to the rescue.

We enter to find the stage empty, but it’s not going to stay that way. More is packed into the 1hr’s traffic than an already stuffed carry on bag when the check-in assistant regretfully informs you that your main suitcase is over the weight limit.

Brave Macbeth opens rather like the first instalment of the ‘Hotel Transylvania’ franchise, an atmospheric nod to the spine-tingling atmosphere of the original that has Granny and me worried. If this is the spooky opening how will Daughter 1.0 handle the coming murders and mayhem? We need not have worried. It isn’t long before the big musical numbers, catchy tunes, and fabulous dance numbers have the audience (and even naughty, naughty the actors) in fits of hysterics. King Duncan’s demise is the cause for so much merriment that she’s laughing like a drain pipe.

This is a big cast and one of the best-balanced ensemble pieces I’ve seen in ages. The witches are fiendish without being traumatic. Lady M is fantastically melodramatic, to the point were even Henry Irving might have asked her to reign it in a bit. Banquo, Malcolm, and Duncan do more with their foreshortened parts than Tyrian Lannister off on a night out with a jackass and a honeycomb. Macduff foils his villain in more ways than one. The Thane of Glamis, Thane of Cawdor, and King hereafter himself is bold, brave, and brilliant. His set solos pieces strongly hint at the depths which there isn’t time to plumb while his interactions with the other characters give a more flavourful summary of Macbeth on stage than would a dehydrated copy of the SparkNotes served up by Heston Blumenthal under a foam of literary criticism.

The performances alone would make this a five-star experience, but it’s what’s gone on off stage that makes it truly outstanding. The choreography is so good even this double-left-footer wants to join in. The adaptation is streamlined and sophisticated. The composer needs to be dragged off to a military research facility and forced to weaponize their earworms – I am gutted that the soundtrack isn’t for sale in the lobby. Most importantly, Daughter 1.0 has had her first introduction to Shakespeare and come away wanting more. Captivate Theatre has done exactly what it says on the tin.