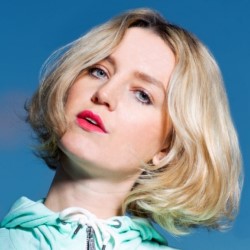 There’s a joy to ridiculousness. It’s like Sudocrem for the general psychic onslaught of existing. Innately, I think there’s something worth celebrating in the ridiculous, and Megan Shandley’s Megazoid is certainly evidence of that fact.

A homegrown Edinburgh talent, Shandley’s approach to comedy is that of a temperamental muscle car: smooth riding for the most part, with occasional and unexpected jolts to high speed. It’s easy to be lured into a false sense of security by her sheer laidback-ness, but there’s a wonderful weirdness hiding just underneath, waiting to express itself in an unexpected punchline.

The material is, as you might expect, varied. Shandley embraces the tried-and-tested “scattershot topics, barely-there theme” approach carved out in comedy clubs since before time, and it works. This isn’t a show that needs to be slick or tightly woven together. It’s hanging out with a cool mate who drinks wine from a bag, and has a lot of thoughts on the Lion King – and honestly? That’s all it needs to be. The comedy is relatable enough to keep you anchored and odd enough to keep you guessing, but never volatile or needlessly edgy. Shandley is unabashedly a feelgood comic, even if she doesn’t set out to be.

But even good works are not without fault. It’s a bittersweet criticism in that this was a show which left me wanting more. Though fantastically relatable, Shandley’s easygoing demeanour sometimes meant otherwise excellent jokes were let down by a lack of pointedness in their delivery. Constantly, Shandley gives teases of over the top physicality, high-energy and clownish expressiveness, but pulls back before things can reach their most pleasing apex. Fringe slots are tight but nevertheless, this is material in want of greater variance in pace.

Perhaps my disappointment was amplified by the quality of what was one display, and wondering what it could be. Shandley has some fantastic material at her disposal: unexpected, bright and even surprisingly intricate. Arcs and connected punchlines surface with joyful abandon, constantly layering and re-layering.

It’s clear that there’s a wealth of material bouncing around Shandley’s brain – even the explanation of the show’s title suggests as-of-yet unseen country, full of unexpected turns and left-field observations, waits somewhere underneath her blonde bob, and ultimately I found myself wishing I could’ve taken a longer safari. This is, as before, bittersweet: for although it limits how much I can rate the show, there’s no limit to how much I liked this show. Shandley is an extremely charismatic, likeable performer, and with revisions this is an act that could really seriously turn heads.

Megazoid is a wonderful 45 minutes of staring through the world through slanted binoculars. Despite the shortcomings of her act, Megan Shandley is undeniably one to watch – in person, as well as in the long span of time.