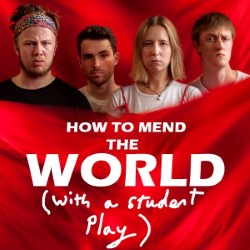 “Delivers on every comedic promise it makes.”

It’s not much of an exaggeration to say I’ve spent a sizeable chunk of my time in the arts. From HSLC Stage School (Hi Karen!) to these years at Edinburgh49, it’s been at least a few hundred hours of devotion sunk into the discipline of playing pretend. And, like a new parent, whilst this longterm commitment has given me an unquenchable affection for the stage, it has also filled me with a deep, bitter disdain. Disdain for self-righteous, zeitgeist-y directing; disdain for “visionaries” who make a lot of noise yet do nothing new; and dark, roiling acidic disdain for shows made to be edgy for the sake of fashionability.

There are many, many reasons to like How To Mend The World With a Student Play. In the service of objectivity, I will go through all of them at gleeful length. But my greatest admiration of this play is entirely personal, and entirely biased: Hyde-like, it has given voice to my worst impulses, and done so beautifully.

The premise of the play is simple: four students try and put together a new, #groundbreaking production of The Crucible in the forty five minutes they have before a funding meeting. To say any more than that would ultimately be pointless: How To Mend The World is a masterclass in comedic farce. There is no great plot twist or consolatory ending. In truth, there’s barely even a plot at all. This is a show that relies entirely on the ability of its actors and the quality of its character writing to justify its existence, and does so in spades.

The show presents itself with gleeful scathingness from the moment its actors arrive onstage: characters Jonty (Francis Nunnery) Felicity (Matilda Price) and Christian (Liam Hurley) offer deliciously satirical yet lovingly realised portrayals of the variously smug, unstable and utterly pathological millieu of the student stage scene. This entire review could be a rote praise-list for the talent of these three actors. Price somehow combines pitch-perfect character work with machine gun delivery speed, bouncing from outburst to outburst like an anxious pinball. Hurley, a man very obviously at home in physical comedy, presents the emotionally unstable Christian as equal parts likable, pitiable, and utterly infuriating. And Nunnery, saddled with the hardest character to make standable, brings a precise yet cartoonish spark to Jonti Bailey-Higgins that somehow justifies every terrible, terrible thing he does.

Special praise must also be given to Ollie Tritton-Wheeler, portraying the piece’s straight man Ben Hackett. Foils in comedy walk a constant tightrope between obvious audience mouthpiece and smug know-it-all, yet Tritton-Wheeler is content doing cartwheels on the rope instead. He is aggressively relatable and damn funny in his own right, managing to take an essential part of the comedy formula and really make it his own.

There is a raw consistency present in How to Mend the World, which runs systematically through every component of production. Though its staging is simple and its theatrical techniques basic, they’re incorporated like gears in a pendulum clock. The intent behind even the smallest FX flourish is at once immediately apparent, and completely fulfilled. Every comedic swoop and dive, whether reliant on human or technical resources, stuck the landing. Despite appearances, this production is clearly one where the idea of theatre as craftsmanship has flourished.

With craftsmanship in mind, special dues must be given to the writing. Devised pieces are mercurial creatures, entirely made or broken in the rehearsal room and unfortunately prone to acute textual bloat. Here, not so. The script for this production is undeniably tight, unavoidably witty and – perhaps most importantly – unmistakeably written from a place of first hand knowledge. I’ve met every character in How to Mend the World in jaundiced dressing rooms and smoky back exits. The genuineness of director Joshua Silverlock’s work lends it a palpable solidity, and keeps the material fresh by nature. Creating work like that is hard enough to do alone, let alone by committee. And yet, it is so.

I savoured every moment of How to Mend the World with a Student Play. It is a precious thing: a theatrical product which delivers on every comedic promise it makes, and doesn’t stop until its subjects are wrung out husks. If that alone isn’t worth the price of admission, then I don’t know what is.