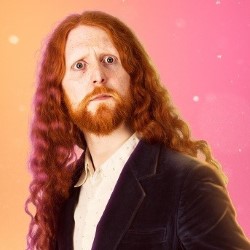 Alasdair Beckett-King is clubbable. Firstly he has the large eyes expressive eyes of a baby seal as well as a fine red pelt that would look sensational as somebody’s sporran. He is also clubbable, in the less bloody, cruel, and senseless sense that, were his name to turn up in the book of candidates, the endorsements from existing club members would be so numerous that one would struggle to find space sufficient to signify one’s support. Perhaps Alasdair Beckett-King, ABK’s, greatest quality and asset is that he dresses the part – he looks very much like Alasdair Beckett-King.

And this is not a small or trifling thing. Slanted on the axis of space-time so that things tend to run from good to bad, from bad to worse, this dimension finds itself in eternal need of an ABK to put our self-destructive behaviours into whimsical perspective. The one we have is dressed in muted dandy splendour, as though he’s the moralising star of an ‘80s cartoon franchise who has popped round in-person to add a little gravity to an ungrounded world. Which he is. I wasn’t planning on seeing any standup this EdFringe, that was until I saw ABK’s trailer in his #Plus3 interview. Could the show possibly be as awesome? In a word, a word requiring no lengthy preamble or overly-wordy explanation, yes.