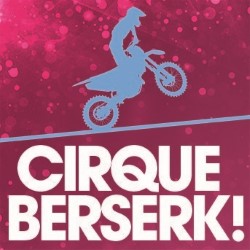 “There’s more room to manoeuvre in Elberel’s glass bottle, before the Mongolian contortionist has begun to emerge, than there is space left in Cirque Berserk’s running order.”

A duck walks into a bar and asks the barman for a pint of lager tops and a packet of sweet chilli and lemongrass crisps. “You’re a duck!” exclaims the barman, “And you can talk. That’s amazing.” “Yeah,” the duck says looking surprised, “I’ve just started work on the building site round the corner.” “Listen, friend,” muses the barman, “one of my regulars is a circus ringmaster. You need to talk to him. He is bound to have a job for you.” “Ringmaster of a circus,” considers the duck, stroking his bill, “with clowns and acrobats and the flying trapeze all in a big top made of canvas?” “That’s right,” says the bar encouragingly. The duck looks totally lost. “What would he need a plaster for?”

I was taught that one by an auld American EdFringe pal on the day I was formally inducted into the and International Patriarchy of Assorted Punsters, a secretive confraternity of dads dedicated to absolute control of global affairs and the telling of jokes that make you groan. “The trick,” my Yankee proposer assured me, “to telling the ‘duck walks into a pub’ story is to mess with the details. It’s never getting stale if you change the type of drink and the type of crisps to suit the occasion.” From that conversation, I took away a greater appreciation of how the American stand-up and storyteller went about his craft, about how only the truly great masters of their art can work to a formula without ever becoming formulaic.

Julius Green, Cirque Berserk’s Creative Director, as well as Martin Burton, the Founder and Producer, have cooked up a formula that always sells out without ever selling out. Cirque Berserk is an international amalgamation of talent. “A non-stop smorgasbord of more than thirty different circus skills,” according to the programme, featuring performers “from as far afield as Kenya, Cuba, Mongolia, Brazil, Bulgaria, the Czech Republic, France, and even the UK!” The aim is to, “combine the centuries-old skills and traditions of the touring circus troupe with a contemporary approach to staging.”

“Was that really only an hour?” I wonder in astonishment as we shuffle towards the exit, the slowest anyone has moved in in the Lennox Theatre in what seems like a lifetime. Of all the superhuman feats achieved packing that much into the preceding 60mins has to be one of the most remarkable. There’s more room to manoeuvre in Elberel’s glass bottle, before the Mongolian contortionist has begun to emerge, than there is space left in Cirque Berserk’s running order. And all of it is as much on target as the arrows she fires with her feet.

The Timbuktu Tumblers are definitely who you would call upon to help steal the world’s largest cubic zirconia from the Springfield Museum. For me, they represent the essence and the core of the Cirque Berserk experience.  Human pyramids, jumping through hoops, limbo with fire – Acrobatics is probably an art form as ancient as painting pictures of bison and woolly mammoths on cave walls. It has been a part of the human experience since before there were streets to perform in. And yet, The Timbuktu Tumblers – who also provide much of the staging sinews as the later acts come on and off – feel as immediate and authentic as a tumbler of mature single malt as they distil the history, skill, and precision required to make a measure of great art seem artless and straightforward.

The acts that follow are a showcase of talent and skill that put all else this EdFringe into the shade. There are Argentinian Bolas, the incredibly moving Four Hands & Two Wheels, strength, beauty, human catapults, knife throwing, aerial acrobatics, the best foot juggler in the world, a giant death robot, a tower of chairs and, to crown all, the extraordinary sound and fury of the Lucius Team with their motorcycles and Globe of Death – a coup de théâtre that has never been brought to a theatre before. And yet, there is a little something there that’s missing.

The most memorable revues are underpinned by an underlying narrative. A story that weaves the disparate elements together into a unified whole. The potential for such a narrative within Cirque Berserk is hinted at by the massive stage presence of Paulo dos Santos. The Brazillian native stands 3ft 6ins in his sneakers, but he dominates proceedings with his clowning, juggling, balancing, and crazy dangerous acrobatics. Together with the very lovely ladies of the Berserk Dancers & Aerial Ballet, he tells (without speaking) an over the rainbow tale of high ambition brought low. With a little bit more tweaking that (for me) essential element of traditional circus, the Ringmaster, could have been introduced while adding the very real bonus of delivering even more of the dos Santos magic. But that really is just me.

This is not a show that should be seen by dad’s of a nervous disposition, the kind who seem to spend their days strongly suggesting to preschoolers that they need to be more careful. It’s all I can do not to charge the stage, stand at the bottom to the 20-foot tower of chairs constructed by Fidel Silot and scream at the Cuban daredevil to, “get down from there this instant. Go perform the trick of sitting at the bottom of the stairs and thinking about what you’ve done.”

Daughter 1.0 (aged 4), by contrast, has entered a state of nirvana that Kung Fu Panda’s Master Oogway could only achieve by sitting alone in a cave for thirty years asking one question. It took Picasso four years to paint like Raphael, but a lifetime to paint like a child. Oh! to be able to see Cirque Berserk through eyes that have no sense that what they are watching is not what the rest of the world is like. Of all our shared EdFringe ‘19 experiences, this has been the highlight. It’s not just that the memories will linger, most likely forever, but that the most essential lesson a parent can teach a child has been demonstrated beyond dispute. “Baby girl what is impossible? I whisper as Alan Pagnota stands behind Rafael Ferrerira’s wheelchair and the crowd goes wild for the duo. “Nothing is impossible,” she rejoins without a trace of doubt in her voice.