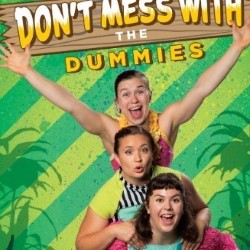 “Done with skill, imagination and a real understanding of what kids love.”

Having started out Fringe adventures with the Splash Test Dummies we thought we’d visit the other act from the Dummies Corp ‘’Don’t Mess with the Dummies’. My daughter had been asking to see the ‘’girl dummies’’ since we had left the first show so it was time… largely to keep the last vestiges of my parental sanity intact.

The show starts out with three young explorers in a jungle. Over the course of an hour they try to read a map, pitch a tent, get into sleeping bags and eat a banana. That makes it sound routine it is anything but.

It was impossible not to warm to them. Their interplay and comic timing were spot on. The characterisations were very good and in large parts extremely funny. There was essentially no dialogue – a few words here and there – and they mostly communicated in funny noises. That is no mean feat over an hour and it all made sense.

Dummies Corp productions are an assault to the senses which bring together clowning, acrobatics, slapstick and much more besides: skipping ropes, puppetry, hula hoops, silly string, juggling and log-rolling. My eldest had one of the Dummies come up to her and throw popcorn in her mouth (don’t ask) whilst both of them were up and dancing in the aisles at various points.

It really is wonderful watching these shows with children – at one point, the Dummies perform the old gag of one person hiding behind a screen to make it look like another person has an extremely long arm. Both my kids were asking how they did it, how the lady had such a long arm. Others around us were prodding their parents and asking the same question. I think the world is probably a better place believing in that sort of stuff.

My personal highlight was the ‘Lion Sleeps tonight’ sketch with the sleeping bags. It was both inspired and hysterical. Slightly jaded and underslept 37-year-olds probably aren’t the target market for the gag but it really was very funny. I loved how they were in amongst the crowd a lot trying to involve the children. I loved the references throughout: nowhere else in the Fringe will acts perform to Mozart and to 2Unlimited.

One thing I particularly liked was that it was three women doing it. All too often these sorts of shows are all-male or majority male. It was great for everyone in the audience to see three hilarious women doing it. My eldest daughter – who adored the Splash Test Dummies – said she preferred this show because it was girls doing the funny stuff. That’s not a small thing. Indeed, all things considered, it is a pretty big one. My youngest – who is probably at the very bottom end of sitting through an hour – loved it.

It is impossible to watch Dummy Corp acts without a smile on your face. It is just good ol’ fashioned family fun but done with skill, imagination and a real understanding of what kids love. More please.