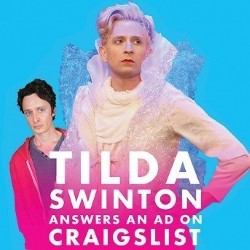 “A gem of the surreal comedy scene.”

My consumption of Tom Lenk’s work, like many, is limited to his appearances on the small screen. His time as Andrew the reformed(ish) demon-maker-turned-sidekick in Buffy the Vampire Slayer definitely earned him a place in my heart, but that sells him short. He’s made appearances on the Broadway stage, is a playwright in his own right, and now (most importantly) the Edinburgh Fringe, in a show whose brief is impossible not to take a second look at.

Tilda Swinton Answers an Ad on Craigslist is one of the most successfully surreal Fringe shows I’ve ever seen. The title both sums it up entirely, and fails spectacularly to capture anything of its substance at all. The premise itself sounds like the setup for a joke: a struggling, suicidal young man (writer Byron Lane) gets a knock on the door, and it’s Tilda Swinton. Everything unfolds from this single origin point, and blooms out in absurd fractals from there.

Don’t be fooled, though. From the moment Lenk arrives onstage as Swinton, that absurdity has justification. As the marketing may suggest, Lenk’s performance is the main event, and it certainly doesn’t disappoint. Lenk’s Swinton is so unconventionally charming that it’s hard to describe. It’s almost like the cubist version of charisma. Whether blowing in like a winter storm at a bag factory or whispering sweet nothings to an espresso machine, Lenk captivates a crowd like no other. It’s true spectacle, and well worth the price of admission.

This is not, however, a one man show. Walt, Swinton’s project and the main audience touchpoint, is a fine element of grounding in a show that could easily lose its feet. He does a very good job of playing constant foil to Lenk’s fifth-dimensional grandeur, and his puppydog appeal is undeniable – though, occasionally his delivery slipped from “sad and confused” to “disinterested”. Whilst in other shows this might slide, when playing on the same stage as a mad swan-lady from the nth dimension, it shows. As a writer, Lane should be incredibly proud not only of the task he’s undertaken, but the tightness of his script. The joke density is intimidatingly thick, and some sections feel as if the laughs are built in wall-to-wall.

Mark Jude Sullivan fits in perfectly to the heightened reality at both ends of the pole, pulling double duty as self-obsessed Bobby and Walt’s whitebread father. His quiet turmoil later in the show, oddly, is one of the most compelling emotive moments simply due to its relative silence. Opposite him is Jayne Entwhistle, whose portrayal of Walt’s mother is a pitch perfect rendition of the middle-American mom. However, I must particularly praise her as Wanda the line chef, a blink-and-you-miss-it character who (surprisingly) had some of the best lines and delivery of the entire show.

As a comedy, it’s hard to want more from Tilda Swinton Answers an Ad on Craigslist. Though (as is usual) a few jokes drag beyond their apex of funniness, it’s a tightly written and directed piece of absurdist theatre that knows exactly how to work its material. However, there’s an emotive undercurrent beneath the laughs, and it’s there that the show stumbles. Though by the end everything ties into a fairly satisfying pathos, the emotive content of the first half feels vestigial and undercooked compared to the piece’s stronger elements. Whilst certainly not a traditionally dramatic show by any means, it nevertheless lacked the emotional foundation needed to turn what is (admittedly) a great show into an outstanding one. That is perhaps the greatest frustration of director Tom Detrini’s work, which constantly teases at perfection but never holds it hard enough to stick.

Tilda Swinton Answers an Ad on Craigslist is a gem of the surreal comedy scene, and very much one to catch while you can. Lenk is a tour-de-force as Swinton, and worth every since flouncing, strange moment. You might not be able to explain what you’ve seen afterwards, but I can guarantee you’ll feel positively about it.